People have played different card games but after some time they find the game very boring and don't want to play the game again. So if you are looking for game which is very addictive and fun to play then you should download MARVEL War of Heroes in your Android device. It is an electronic collectible card game which is compatible with Android and iOS operating systems. MARVEL War of Heroes comes under the category of arcade and action in which users have to make a team of superheroes to destroy the enemies. Users have to fight battle with the help of cards and they can trade with other players to collect cards and resources to win the battle. So take a look at the features of MARVEL War of Heroes and how it is different from other card games available in market. 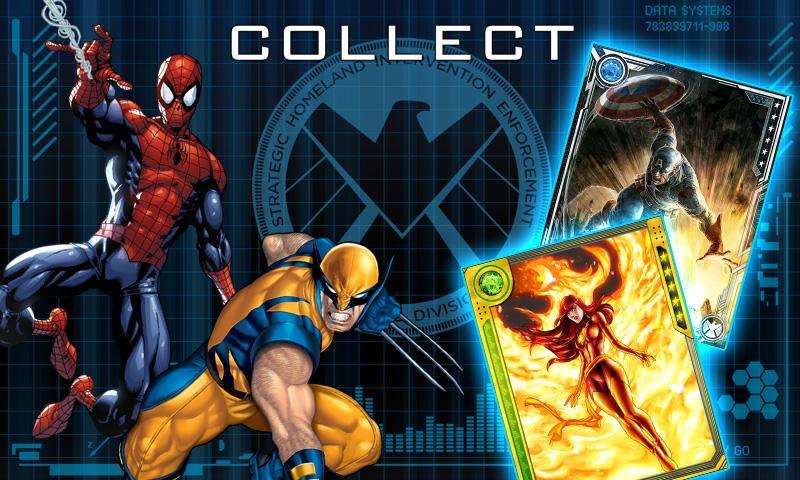 MARVEL War of Heroes is based on simple concept that you have to recruit different superheroes to fight against some powerful enemies as they are looking to balance the power in their favor so that they can lead the world. So you have to just start the game and start adding new heroes to your team and join your friends also to make the most powerful deck of superheroes which can beat any enemy who comes into your way. If you want to earn a starting cash than you should always start with a referral code. You can distribute status point in three ways that are energy, attack and defense. Users have to face different missions which will earn them card +XP and in each mission users are going to face the boss and if they beat the boss they can earn lots of points and +XP. These missions will help you to get resources. Resources are the treasures you earn from winning a level and you can combine different treasures to form a rare card which will help you to clear a level. You can add new members to your team and each new member will earn you some stats point which you can distribute to make a strong team of superheroes. As you move ahead and clear levels you will earn powers and points. The option of trading will start when you reach the level 10. You can combine two cards which is known as fusion and it is going to be more powerful which will help you to tackle your enemy. You can participate in different events which will earn you points but the main advantage of these events are that they provide a good practice to prepare for your battle.

1. Add more number of members which will make your team stronger and provide you with points.
2. Always start with referral code it will earn you with a starting cash.
3. Save your cards as long as you can as this can help you to battle against the most powerful enemies.
4. Trading is very important so never forget to trade with other players.

So the features are very promising and one can find this game as an addictive game. The weak point for this game is that people have to wait for a long time for the progressing of this game but people who can spend money they can progress very quickly in the game. Overall, the game is fun and different from other card games which users have played. So start playing this game and share your views about this game with other users.

Read about the challenging Facebook card game Solitaire Tales. Get to know the gameplay, features, tips to play, pros and cons from the review given below.

Do you love to play Card games and want to enjoy some free card games? Then stop searching any more for such games! On Facebook you have some of the best Card games that you can enjoy without the need of even a penny. Read our list of top 5 best Facebook card games right now.