DVDFab is a company dedicatedly working on DVD Copy, Blu-ray Copy, Blu-ray Ripper, DVD Ripper and Video Converter for more than 9 years. They are one of the pioneers of this field and are known as the best video software company. DVDFab has a reputation for delivering what they promise. They have a plethora of options to convert your videos in almost any format compatible with your mobile or computer device. Flv, mkv, wmv, avi, m2ts, mp4..., you name it and they have it! And if you are not sure about what video format your device supports then you can leave that too in the hands-on DVDFab video format converter which has a database of latest mobiles from different manufacturers. The more advanced your phone, more DVDFab has on offer, be is a 3D screen smartphone or a big tablet screen. 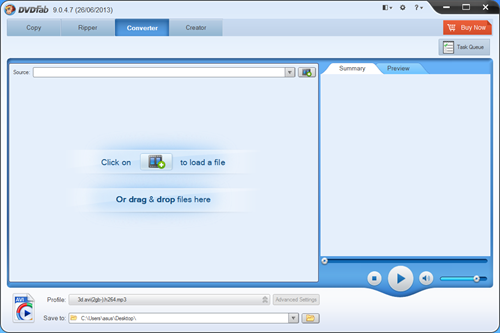 Default settings: More or less, there would be one or few more of your preferred formats which you would like to convert your videos to. And of course, it can become a little irritating when you have to set up the formats again and again for each video you want to convert. DVDFab video converter takes minute details about the needs of its users and accordingly has provided you with a Default Setting feature with which the system will remember you preferred conversion settings thereby saving your precious time.

Even if you do not set a preferred format in Default option, Fab 9 converter still remembers the recent formats you have converted your videos to and you can easily select the format from there.

Preview Many time your videos would be long and might take hours for conversion specially when converting to 3D videos. In such case it is obvious that we would like to see how the conversion is happening to make sure that the resources of your system are being used to do something productive only. With preview option you are shown the frames of the video files so that you can get an idea of the video quality being rendered and decide if you really want to continue with the conversion. 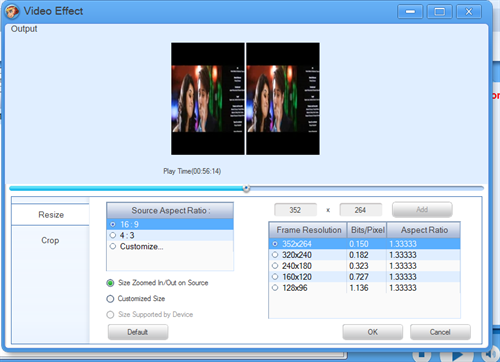 Speed: We found the speed of conversion to be very fast. It took our movie of 2.30 hours on VOB format to be converted into .avi format just 20 minutes at a speed of 19.90 fps. DVDFab does this due to their support for batch conversion, ability to work with multi-core CPU and latest NVIDIA CUDA.

Advanced features
For advanced users who would like to do changes like selecting the encoding method, changing the frame rate or resolution, DVDFab offers you a lot of options.

Video: In video features, you can change the Resolution, Encoding Method, Frame Rate, change the bit rate of the video or split the video into multiple parts by editing the quality features of the video.

3D: In case you are rendering a 3D video, then you have the option to customize the Anaglyph, Split screen orientation, Gain and Visual depth. You can also decide whether you want to have the two video files of 3D as separate or as two streams in the same file.

Information: You can change the video information if you would like. This includes Title, Filename and the Author.

We spent a fair amount of time with this DVD converter and here is my overall review of this tool.

Pros: Support for NTSC and PAL, HD support up to 1080 pixels, 3D video conversion capability for new 3D screen devices, 5.1 multichannel audio support and an active R&D team which constantly updates the supported formats and devices in the software are some of the interesting features of DVDFab.

Cons: There are few limitations we found. They are, we cannot convert videos to VOB formats, take a lot of resources while 3D video conversion so can heat up the system. Price seems to be a bit expensive for a video converter, even though it is reasonable for the kind of features you get.

If are you looking for a video converter or video editing tool, WonderFox DVD Video Converter is definitely worth giving a try. It is one of the most efficient video converter utilities we tried so far. Read this review to learn more about this tool from WonderFox Soft Inc.

Are you looking for a good video converter to convert your video files from one format to another? Check out this article on Movavi Video Converter 18