Indian manufacturer, iBall is well known for its computer accessories across the country. The company is slowly developing good smartphones and tablets too. Earlier this year, we have seen iBall Andi 4.7G Cobalt that has gained a positive response from the market. It has many solid specifications that include 1.2 GHz quad-core processor, Android Jelly Bean 4.2 OS, dual-SIM support and other.

Now, the company has added yet another budget device to its Andi series of phones, called iBall Andi 4Di smartphone. It has some decent features at its price range. The phone has a support for 3G, runs on Android operating system, dual SIM support and many more.

Are you excited to know complete details about this new smartphone? If yes, then what are you waiting for? Let us have a look at iBall Andi 4Di features, specs, price and availability. 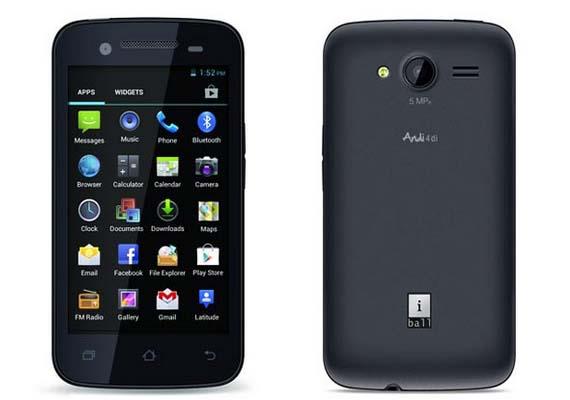 The iBall Andi 4Di sports a large full Capacitive touch screen of size 4.0 inches. The display type is IPS WVGA with a resolution of 480x800 pixels. This display offers wide viewing angles for its users.

The phone comes with an internal memory of just 512 MB, out of which user can get 150 MB for use. However, it can be further expanded by up to 32 GB with the help of a microSD card. The device is being fused with a 512 MB RAM. This could be a disappointing factor for the users but we should also consider its price as well.

The Andi 4Di runs on Android Ice Cream Sandwich (v4.0) OS. And it is being powered by a Powerful 1.0 GHz Cortex A9 Processor.

The new budget smartphone has dual cameras. There is an enhanced 5.0-Megapixel rear camera with LED Flash support. Gliding to its front, there is VGA front facing camera that helps users for video calling.

The connectivity options of iBall Andi 4Di are one of its highlighting features. On the connectivity front, the phone supports 3G HSUPA, HSDPA, EDGE, Wi-Fi 802.11 b/g, Bluetooth with A2DP and more. There are very few low budget smartphones that have support for 3G networks. The phone also has a support for GPS & A-GPS. The Andi 4Di of iBall packs a couple of sensors that include G-Sensor, Proximity Sensor and Light Sensor. Further, the device also flaunts dual SIM capabilities with Dual Standby.

iBall Andi 4Di is backed with a 1700mAh battery and there is no official information on its backup capabilities.

The Andi 4Di will be available in two colors that are Black, Silver, White and Chrome. When it comes to price, the phone is being offered at an MRP of RS 5999.

The iBall Andi 4Di comes with some decent features at its price. It has a 3G support, Dual SIM with Dual Standby and a big 4-inch capacitive touch screen. As we said earlier, there are very few low budget phones with 3G support. So, this factor would become an advantage for Andi 4Di. It will definitely give a tough competition to many other low budget smartphones in the market.

So, if you are looking for a new low budget Android smartphone with impressive features, then iBall Andi 4Di is the best choice for you. What do you say folks? Have your opinion through the comment section provided below.

The iBall Andi 5h Quadro is one of the latest Android phones released in India. Here you can get its full specifications and latest price in Indian stores, both online and offline.