Adobe Creative Cloud is the new way of using Adobe's range of software titles. It replaces the familiar Creative Suite of products, although the familiar titles like Photoshop are all still there. I've been using Creative Cloud (CC) for several weeks now, and here are some observations I've had while using the system.

You No Longer "Buy" Apps

Perhaps the biggest and most important change is that Creative Cloud is now a subscription. Instead of buying the individual software packages (usually for several thousand dollars), you simply pay a monthly fee to access the same software titles. Adobe has made it very easy for people to sign up. There are no "packages", only one monthly fee with access to everything they make. This is actually pretty economical when you work it out, and if you are a student, it works out even cheaper because you are entitled to a tidy discount on the subscription.

Not only do you get access to their design tools (like Photoshop, InDesign, Illustrator, Lightroom and Acrobat), but their filmmaking tools (like Premiere Pro and After Effects) and web design tools also (like Flash Builder, Muse and Dreamweaver). If you were to purchase all these products individually, it would set you back by a few thousands. A Creative Cloud membership on the other hand works out to be relatively inexpensive.

Adobe also gives you access to other services in their collection, such as Typekit, a way of using desktop quality fonts on the web. It has been delayed for a while now, but soon a CC membership will give you access to hundreds of Typekit fonts offline, for use in design projects. While you need an active CC membership in order to keep using the fonts, this features alone is worth the price of a subscription.

If you look at all the tools together, the membership looks to be like very good value. But most people will probably only use a handful of tools, and so they do not need access to everything. If that is the case Adobe lets you subscribe to just one software title. This is in fact works out to be quite economical if you are only going to be using one or maybe two apps, but if you require more than three then it is probably just cheaper to sign up and get the lot.

A lot of people have raised issues with Adobe over the subscription model. While some people will like it, others feel a bit worried at the idea of "renting software". Designers and filmmakers are people who spend a lot of money on their gear and expect it to make them a lot of money in return. For some people, the idea that if they choose to end their subscription, they will be unable to open their old files is troubling. While Adobe has tried to calm people down around this, the fact remains that you need an active membership in order to keep using their tools.

As of writing this, the apps are still not integrated quite as much as Adobe has promised us, although it is clear where they are going. Right now an application installs on the computers you want to use CC on and manages your account. From here you can update the applications you have installed, install more apps, manage the fonts you have downloaded from Typekit for local use and manage your storage.

One of the myths going around is that Photoshop etc are now web apps. That is not true. They are still the same, very large, very powerful desktop applications that you need to install locally. Adobe does not do web apps (apart from Kuler, where a web interface is suitable). 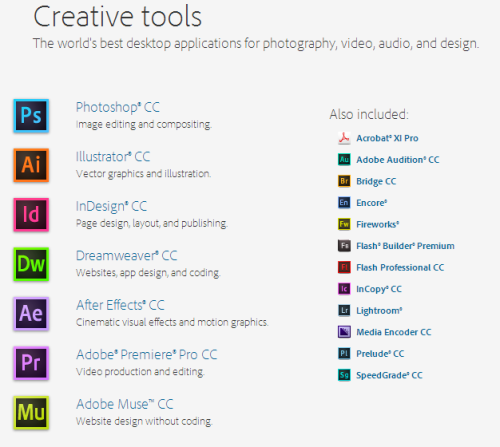 One of the biggest selling features of CC is the use of the cloud to manage your documents. Every subscriber gets 20GB of storage space on Adobe's servers which you can use to store basically any type of file you like, although your projects are likely to come first. This allows you to synchronize your various computers, and keep working on the same file regardless of your location. If you use any of the Adobe apps for iPad, the cloud also integrates with them.

In practice I found this feature less helpful than it might be. My projects usually run into the gigabytes, and that is not practical (yet) to keep uploading and downloading that sort of content off the internet.
Where the cloud really shines however is the ability to show people your work. You can show your clients where you are currently in the project very easily indeed. Yes, you can use other tools like Dropbox. But the additional integration into Adobe's world cuts down the extra step and should help a lot of people ease their workflow.

It is the future for Adobe

Yes, there are reasons you might want to hesitate before buying (especially as Adobe locks you into a one year contract). You might not like the idea of renting your software, or perhaps you already have CS6. Adobe Creative Cloud is not a finished package yet, but I like what I see and this is definitely where the future is. If you want to have the latest tools, then signing up to Creative Cloud will be a great idea.

These days, almost all businesses use cloud services. However, due to increased data security threats, a monitoring system to administer the data and performance is also essential. Many cloud monitoring tools like Ganglia, Hyperic and Nagios are available in market. Read this article to know about the best cloud monitoring software applications.

Read our review of Intuitive Password management solution. Know the pros and cons of this online service, know its features and all what it offers to its customers.

Are you looking for a secure, reliable and easy to use cloud based password management software? Take a look at Intuitive Password and read our review of the same.

Read the complete review of a cloud based remote access device named PocketCloud Remote RDP / VNC. Know the features, installation steps and the review of this app. Know what all it has to offer to satisfy your remote access requirements.

With the increase in the popularity of cloud based systems, so many password managers have come in the market. This article reviews one such cloud based password manager called my1login. Refer to the article for registration process, features and pricing details.

More than 37,000 folks have signed.They don't like Adobe CC licensing.Show @Adobe how you feel. https://www.change.org/petitions/adobe-systems-incorporated-eliminate-the-mandatory-creative-cloud-subscription-model

Another more fiscal way to show @Adobe you dont like the CC licensing scheme.http://adobe2014.tumblr.com #adobe2014﻿