Let us compare the features and specifications of the both the phones and see which one is a better choice for the customers.

Overview of Micromax Canvas 4 A117 smartphone

Micromax Canvas 4 is one of the most popular smartphones in market. It has got around 4000 pre-orders within 7 hours after opening pre-booking. With high definition IPS display screen, and 13 megapixel camera, the device has a powerful processor and strong battery support. It is now available to pre-order online. It is the successor of company's most popular A116 Canvas HD - an Android smartphone with 720p screen, which is now available to purchase in market at just $214. 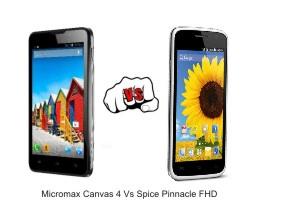 Spice Telecom has also launched their Pinnacle Full HD smartphone As a perfect competitor of Canvas 4. It comes with same display size and operating background but at lower price. As name suggests, the Spice handset comes with Full HD touch screen display with powerful quad-core processing unit and stronger lithium battery than Canvas 4. It is also available to pre-order online with its multiple high end features and access to Spice cloud storage.


Both the devices are identical in respect to their 5 inches touch screen display. The Micromax has designed the display screen with the resolution of 1,280 x 720 pixels and IPS HD. On the other hand Spice handset comes with higher resolution of 1,920 x 1,080 pixels with Full HD. So, Spice mobile wins the display competition among these two devices.

In present scenario, the camera is one of the main factors, which highly influences the price of any smartphone. In this case, I found Canvas 4 on upside with its 13 MP highly efficient primary camera as well as 5 MP front facing camera. While talking about Spice mobile, it offers an 8 MB auto focus rear facing and the other 2 MP front-face camera for snap taking.

Both the smartphones run on Android 4.2 Jelly Bean operating platform and both are powered up by quad-core processing units. Micromax Canvas-4 owns Media Tex MT 6589 processor, which clocks at 1.2 GHz, couples to a PowerVR SGX 544 graphics card for boosting up gaming and multimedia. The Spice handset owns more efficient processing unit running with frequency of 1.5 GHz.


Almost with same networking ports both the Android devices are packed with Wi-Fi, 2G, 3G, GPS, Bluetooth etc. Pinnacle FHD also supports dual-SIM, G-sensor, pop-up play, light sensor as well as FM radio. Both devices are also almost same in power backup. The Canvas 4 is packed with 2000mAh battery where the Spice mobile owns 2020mAh battery. That means user can spend more time outside of office or home with any of the two handsets.

In other features list, Micromax mobile shows look away pause feature, which lets the playing video to be paused immediately, as soon as the user looks away from its display screen. It sounds quite similar to Samsung mobiles Smart Stay feature. User will also find 'Block and unlock' feature on this device. On the other hand, Spice has granted "Spice cloud" access to its handset users. Users can access up to 2GB free data storage and can access documents, videos, music, photos as well as contacts across the devices. It also supports various anti-theft and security features.


Both the handsets are now available to pre-book online. Being popular brand and en-cashing success of earlier Canvas 2 model, Micromax has set the price of Canvas 4 at Rs 17,999 where Pinnacle FHD from Spice will be available at Rs 16,999. The customers can pre-book this mobile on www.saholic.com. Its delivery will start from July 20th of this month.

It shows that the interested Spice smartphone lovers can get this handset with almost similar specifications to Canvas series device at lower cost.

Conclusion - which is better?

From my review, you can see that each phone has its own advantages and disadvantages. But Pinnacle device comes with low cost, which can mainly influence the customers arriving at the retail store. It is far better in terms of Full HD display, more clocking speed of CPU and lower prices. On the other hand Micromax device wins over Spice mobile for having more powerful cameras and internal storage. So, let us leave this on customer, which handset they prefer and like to buy online.

In this article, I have written about the top 5 latest models of Spice Android phones in India. Here, I have discussed about the various features of the different models. This will be of great help to the buyers while making their purchase decision.

Are you thinking of buying Spice Coolpad Mi-515 which was recently released in the Indian market at a price of Rs. 9990? The phablet has a 5-inch display, a quad-core processor and many other high end features. Read this post to know more about features, specs, price and availability of Spice Coolpad Mi-515.