The Indian smartphone industry is growing with great pace and this makes big companies to introduce their products here. The reason behind this growth is not only because of the big ones in the smartphone market but also due to manufacturers from within the country. And among them Micromax and Karbonn are the leading ones. Now both of them came up with two devices which really are going to rock the smartphone market. They are Micromax Canvas 4 A210 and Karbonn Titanium S9. The smartphones are taken for a comparison not only because of these companies are from India but also because of their similar features and price range. So in this article we are dealing with the similarities and differences between these devices and let's know which one is the best for you. 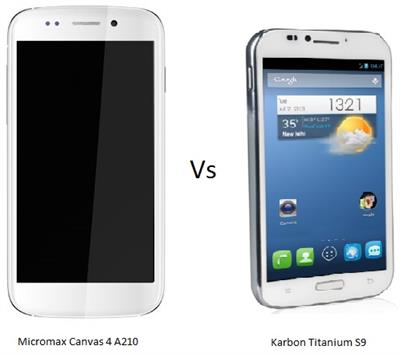 Micromax Canvas 4 A210: The display and design features of the device is pretty good and attractive. Talking about the display features, the device comes with a display screen of 5 inches and comes with a display resolution of 1280x720 pixels. The display is enhanced with IPS display technology and it enables the user to enjoy videos and images without losing its life. The Micromax Canvas 4 is featured with Corning Gorilla Glass 2 for protection. Talking about the design, the device has its dimensions, 144.5x73.8x8.9mm. The device's dimensions make things clear that the device is that much slim and that the designing is done so smartly.

Karbonn Titanium S9: In case of Karbonn Titanium S9, we can see a large screen of 5.5inch screen, which is larger than Canvas 4. The only difference that we can see from the Canvas 4 is the screen size. The Titanium S9 has the same IPS display enhancement technology and has 1280x720 pixels resolution. Another drawback we can find in Titanium S9 compared to Canvas 4 is the lack of Corning Gorilla Glass. Talking about the design of the device, it has dimensions, 134.6x66x9.3mm. On comparing we can find the Titanium S9 a bit thicker and larger than Canvas 4.

Actually both devices have nearly same display and design features and the Karbonn Titanium S9 scores more because of the larger screen size. But the lack of Corning Gorilla Glass protection in Titanium S9 has to be noted.

Micromax Canvas 4 A210: As we go deep into the hardware features of the device we see the Canvas 4 loaded with Quad-core Cortex-A7 CPU clocked at 1.2GHz. It also comes with a GPU of PowerVR SGX544, which really is a good news for the gamers. The device is featured with MTK 6589 chipset and it does functions with the expectations. The Micromax Canvas 4 comes with latest Android OS, which is Android v4.2.1 Jelly Bean. It comes with 1GB of RAM and has storage of 16 GB as internal. It can be expanded up to 32 GB by microSD card.

Karbonn Titanium S9: Karbonn Titanium S9 is also equipped with good hardware specifications like the Canvas 4. The Titanium S9 is loaded with 1.2 GHz Quad-core processor just like the Canvas 4 but the chipset is not known yet. The device is also shipped with Android 4.2 Jelly bean, which makes it the latest device with all good features. It has a RAM of 1GB and also has inbuilt storage space of 16GB. The device's memory can be expanded to 32 GB by the aid of microSD card. Here the score is leveled because the features and specs given to both the devices are almost the same. So the decision cannot be made on considering the hardware and OS features of the device.

Micromax Canvas 4 A210: The new Canvas 4 comes with a bunch of good connectivity and camera features. Focusing on the camera features, the Canvas 4 comes with a camera of 13 megapixels, which is enhanced with autofocus and LED flash. It can record videos of 1080p at 30fps. It also features a secondary camera at the front which is of 5megapixles and enables the user to record videos at 720p resolution. Coming to the connectivity features, the device features Wi-Fi, Wi-Fi hotspot, Bluetooth v4.0 and also has microUSB of v3.0. It also features Dual SIM capability.

Karbonn Titanium S9: The new S9 comes with almost same features as of the Canvas 4. The Camera features of the Titanium S9 includes a rear camera of 13 megapixels which is capable of capturing videos and images in HD quality and that's the feature that the people want today. The camera in Titanium S9 is also featured with auto focus and LED flash. The device also has a front facing camera, making it a dual shooter and one on the front Is of 5 megapixels. This makes video calls more clear. The connectivity features of Titanium S9 are Wi-Fi, Bluetooth and GPS. It also features Dual SIM functionality and also has microUSB.

The connectivity and camera features of both devices are same that a decision cannot be taken between the two by only considering these. Anyway this near similarity shows how good the competition is. And choosing the best of two is really a hard task to do.

Battery and Other Features

Micromax Canvas 4 A210: The batter features in Canvas 4 is pretty good that it comes with standard Li-Ion battery of 2000mAh. The camera may find a bit low but it really does the job. Other features in Canvas 4 include the Gesture communication and smart pause. The user can make a call by just bringing the device close to ear and will automatically switch to speaker mode if the phone is turned over. The device also features smart pause feature which is seen in Samsung smartphones. This makes the videos pause when the user simply looks away from the screen. It also comes with video pinning feature where the user can watch videos as they do the other tasks like surfing and texting. It also allows us to watch two videos at a time simultaneously. Also it has 'blow to unlock' feature where the user can unlock the screen by simply blowing on to the screen. And that's a feature that everyone wants.

Karbonn Titanium S9: The latest from Karbon, which is the Titanium S9 comes with a battery of 2600mAh. This is the only feature that can be found on the Karbonn Titanium S9 which takes over the Canvas 4. Also the S9 lacks the adorable features like smart pause, video pinning, blow to unlock etc.

We have seen and compared the different features and found many of them available in both. Like in case of hardware, OS, camera, connectivity both the devices scored equal. The difference we found was in case of display, battery and some other extra features. In Titanium S9 you will get a big screen and large battery than in Canvas 4. But considering the features that the Canvas 4 offers like the gesture communication, video pinning, smart pause etc, the user will be forced to pic the Micromax Canvas 4. Also the price tag ensures the bright future of the latest device from Micromax. So, from this detailed comparison that we have gone through, we finally got a winner which is clearly, the Micromax Canvas 4 A210 with an attractive price tag and impressive features. If you are looking for a 'smart' phone with a midrange price the Micromax Canvas 4 is the best you can get.

Are you thinking of buying a new Android smartphone with quad-core processor? If yes, then you are at the right place. Here we are providing complete features, specs and price of newly launched Karbonn Titanium S9 smartphone.

Micromax Canvas 4 has been announced. As promised by Micromax, its prebooking has begun for Rs 5,000. Read out the article to know more about it. Also know about its top specs, features, pros, price and availability in India.