Alike Temple Run 1 and Temple Run 2, Oz boasts some different concept of running. However all credit goes to Imangi Studios for developing Temple Run game for the first time in the history of Android games and Play Store. Temple Run Oz is developed by "Disney". Disney is one of the top app developer on Google Store and the developer of 'Where's My Perry?', 'Toy Story: Smash It!' and 'Wreck-it Ralph' games.

There have been many reviewers who claimed Oz as the best game played by them ever. According to "TouchArcade" Temple Run Oz is the most appropriate and entertaining game to date and for which the author has kept it in his favorite list. According to "Kotaku" Temple Run Oz is a very interesting game. It is better than any other Temple Run games in every aspect. It is sleeker, prettier and faster and one can get afraid as well as entertained during the gameplay.

CNET has also written a review about Temple Run Oz game. According to them, Oz is a fun addictive game. Lush environments with frightening objectives, yellow path to confuse the player and unique new worlds to go through! And the inclusion of many mini games in it, especially Balloon ride makes it quick, different, better and attractive than Temple Run 1 and 2.

According to me Temple Run Oz is a total madness. What need more than having a relaxing ride, Oz creatures following you, running for one's life, jumping, leaning and turning right/left and scoring big in a single game or say, just all in 1. Isn't this a total madness?

Temple Run Oz is inspired from Temple Run 1 and 2. Where from the game got it name "Oz"? The answer lies within "Oz". Actually "Oz" is a movie and the game has got inspired from it. The game is endless and one has to run for his/her life. No word for resting and no time to slow down your swiping rate on the touch screen. Experience the most thrilling running game from Disney powered by Imangi Studios.

The story line of the game goes like- some Oz creatures are waiting for you out of the cave and one you one out and they start to following you like your shade. From there, go ahead through the yellow path. Jump or lean through the obstacles like rocks, living creepers, trees and so on. Collect coins, magnets, save me's and much more to advance in scoring big every time. Use coins to upgrade your powers and to buy new characters and power ups. Collect magnet to attract coins towards you. It is the best way to gain large bounties. Collecting save me's (diamonds) within the game play will save you from dying.

Features of the game

Temple Run Oz is full of pros. It boasts many creative and unique features which can't be seen in any other endless running game. 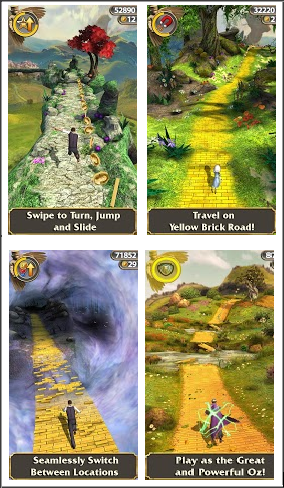 Pros
1. Environmental change. Both enjoying and frightening ones!
2. Fly in a cool balloon and collect many coins and gems.
3. Explore many adventurous stages especially the Dark Woods.
4. Collect many awesome things/collectibles like magnets, diamonds/gems and speed ups.
5. Start with a "head start" to go farther, very faster.
6. Beat you buddies by scoring big and participating in weekly challenges & leader boards.
7. Unlock many characters and many attractive costumes.
8. Ads free!

Cons
I think there is only one con which Temple Run Oz is suffering from and that is none other than price. Oz is a paid Android game. It is priced at Rs 53.18 (0.05K) on Play Store which is actually not much for such a game.

Note: Disney is giving away 1500 coins for free when one downloads Temple Run Oz.

It is not so easy to score big in Temple Run Oz game. I think nobody can survive in this game if played with carelessness. Many players couldn't score more than 5 or 10 million due to their lack of concentration towards the game. I am an hourly player of the game and I have scored more than 50 lacks (5 million) in the game. With my due experience with Temple Run Oz; I am going to give you some hints and tips that will help you in scoring millions in a single run.

Tip 1: Try to save as many life saver gems as you can in a single run. It will help you in scoring more and more. So, start saving every gem you collect while the gameplay and get ready for a grand slam!

Tip 2: Concentrate upon the game. While gameplay, don't let any other idea come to your mind. The more you concentrate the more you survive and score.

Tip 3: Increase your multiplier. It will help you a lot in getting massive scores. Multipliers multiply your score the no. of times you own multiplier. For example, I have 52 multipliers (x52) and every time I play the game for a minute, I score millions. You can gain a multiplier by completing missions/objectives. So having plenty of multipliers will increase your score grasping speed.

Tip 4: Avoid jumping irregularly will help you in boosting your score. I have often seen some of my friends making fun of the game by just jumping and jumping from beginning to end. It is not a good way! One may collide or fall on any obstacle at any time. So jump only when needed. There is the need of jumping in the game but continuing it is not good.

Tip 5: It happens somewhere, especially in the dark woods that an Oz creature comes towards you from the opposite direction and if you don't do anything, game over! When it comes face-to-face before you, leaning through it doesn't work. Try jumping over that very creature and you are safe. This is the best and only way to dodge its claws. Then when you are alive, try your luck for more moments.

This was all about Temple Run Oz game. If you find any wrong or incomplete information or want to know more about the game, then let me know your feedback in the form of responses to this article.