Why should I buy 3G mobile services?

3G transfers voice data (calls) and non-voice data (instant messages, emails) simultaneously and this makes 3G faster than 2G. Unlike 2G, 3G enables video calling, video conferencing and location based services. Sending SMS, emails, updating photos, downloads and other facilities on 2G are all there on 3G connection but the fast speed makes a world of difference. The internet speed on 3G is almost 20 times faster than 2G.

Back in 2010, Indian government made over Rs.67000 crores from 3G auctions. As the operators have taken huge loans for the 3G licenses, schemes like this are efforts to recover the investment. Vodafone India Chief Commercial Officer, Sanjoy Mukerji says, "With the introduction of these plans, we aim at establishing a foundation for providing a 3G data plan for everyone, making it affordable to the masses in the country."

Another interesting initiative is Vodafone's free internet plan for Karbonn phone users. As a part of the recent tie-up between Karbonn Mobiles and Vodafone, Karbonn Titanium S5 users will enjoy Vodafone's 1GB 3G/2G/EDGE unlimited plan free for three months. Karbonn A12 users will get 500MB 3G/2G/EDGE plan free for two months if they are first time Vodafone 3G customers. All this will definitely increase Vodafone's customer base in India.

Vodafone offers all 3G mobile services that other operators offer and the prices are also reasonable. Details are given below.

Video calling- Instead of just audio, now you can make video calls wherein you will be able to see your friends while chatting. Even if your dear ones are far, you can just call and see them any time you want.

Video blogging- You can video call 51212, follow the instructions you get and upload instant video updates on YouTube. Users can upload unlimited videos and share by messaging the video links to friends.

Video cafe- You can video call 51111 and get connected to video categories like comedy, films & spirituality. Every day, more videos are added. You get so many videos that you can't get bored.

How much data allowance should be sufficient?

Before you pick a 3G data plan, you should know if the data allowance the plan offers is sufficient for you. Else, if your data usage exceeds the usage allowed, you will have to pay extra charges which will unnecessarily make a hole in your pocket. Let's see what all you can do with the usual data allowances in 3G plans.

Less than 1GB- In less than 1GB, you can surf web, upload/download pictures, send emails and also use social networking sites.

More than 5GB- If you want to download software applications, movies and make video calls, choose a heave data plan.

Last year's Nielson survey pointed that 97% of prepaid plan users are youngsters. Thus, Vodafone has come up with many pocket-friendly schemes for customers. Under the 'pay-as-you-go' system, rate has been reduced by 80% to mere 2 paise/10 KB and the additional charges for data usage while roaming are cancelled. The recharge of Rs 26 for 25MB is very cheap. The most popular 1GB pre-paid plan is also competitively priced at Rs 251. 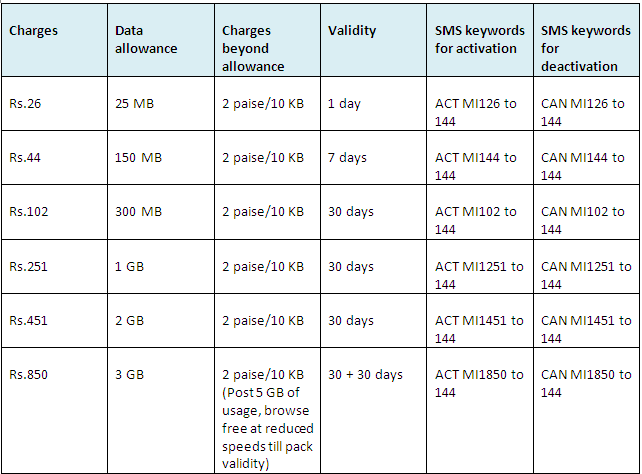 The postpaid plans for mobile phones start from Rs 100 for 300MB and go up to Rs 1,000 for 1000MB. The best postpaid plans here are Rs 500 and Rs 1,000 recharges which allow additional 500/1000 free SMS & minutes. The 1GB and 2GB plans will cost you almost same whether you take a Vodafone prepaid or postpaid plan. In the dongle/tablet plans, voice calls will be barred. 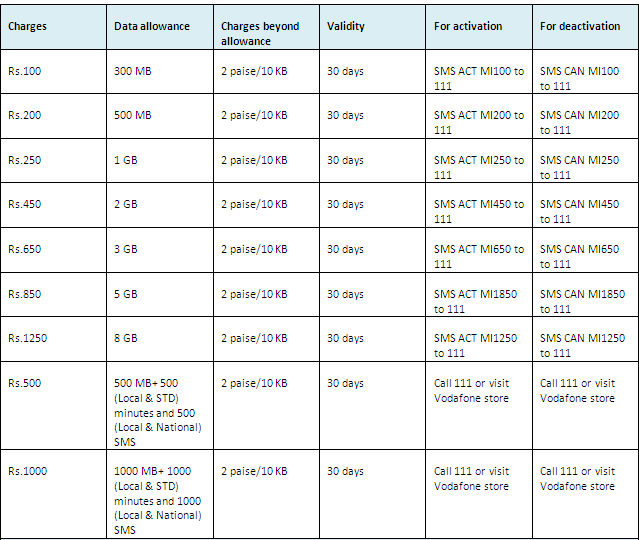 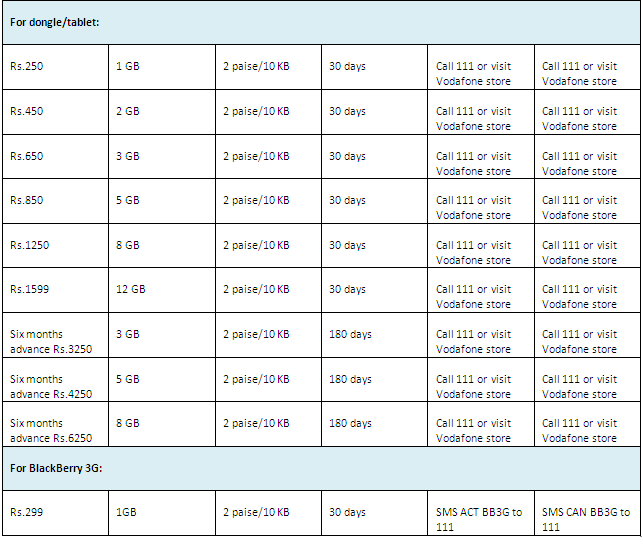 Unlimited postpaid plans- The unlimited postpaid plans are quite economical as they allow users to browse free once the data usage limit exceeds. One needs to pay only for surfing until the allowance limit and beyond that one can use unlimited data at the reduced speed of 64Kbps. In the unlimited plans with bill cap, one needs to pay for surfing until the internet bill reaches the cap/limit. Beyond that, one can surf for free at 64Kbps. The data bill will not exceed the bill cap. 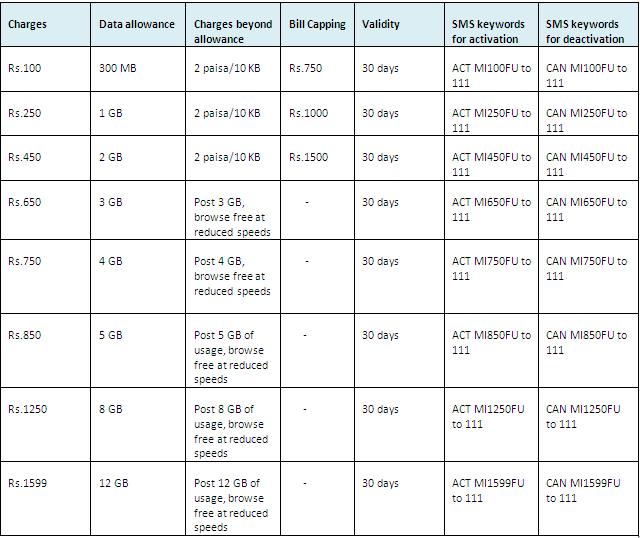 Add-on plans- If you exhaust your data allowance and need to use more at 3G speeds, you can choose any of the add-on plans given below. These add-on plans can't be renewed and they expire with bill cycle. 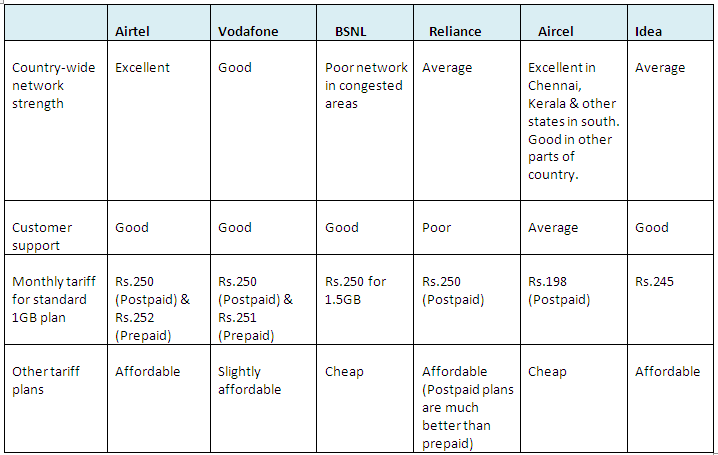 On the basis of customer feedback, I can say that Airtel is the best 3G network provider in country. Surprisingly, Idea is not the same what it used to be some years back. With low internet speed & frequent server problems, it has lost its goodwill. Except for Reliance, the customer support provided by all operators is satisfying. Customers reported bad experiences of incorrect plan activation, incorrect bills and unprofessional customer care executives. The 1GB plan is the most popular plan among users. The monthly tariff for standard 1GB plan is almost same everywhere except for Aircel. Aircel has best plans for budget users. It also offers many cheap mini plans and student packs. On the other hand, Vodafone plans are most expensive if compared with the 3G data plans offered by other operators. Since past few months, Vodafone has been slashing its 3G rates but yet there are better options available in the market.

This post explains in detail the features and limitation of Vodafone 3G. I have compared it with other internet providers like Idea and BSNL in terms of speed and connectivity.

Read the comparative review about two Vodafone Smart Tabs and know the specifications and features. Read this article and decide whether to buy this Smart Tabs or not.

Vodafone has come up with a new budget tablet, Vodafone Smart Tab II 10. It is a high performance tablet powered by 1.5 GHz processor. Read the article to know its specifications, features, review and price in India.

Airtel, Aircel, Vodafone and BSNL are the best 3G networks providers in Chennai. Cost of 3G plans in Chennai vary from network to network and they price them according to the facility provided and the user base they have. Airtel and Vodafone 3G has better transfer rate, where as Aircel provides the cheapest data tariff. However, BSNL tops the chart when it comes to network strength and validity provided for data plan across Chennai.

Are you planning to purchase High Speed 3G Dongle which supports most of the operating systems and available at an affordable price? Then the best choice would be the Vodafone K3800 which is a high speed 3G USB dongle from Vodafone with a speed of 14.4 Mbps and supports major operating systems like Windows, Linux, Mac, Fedora and Ubantu. This article gives more details about the Vodafone 3G Dongle - K3800.