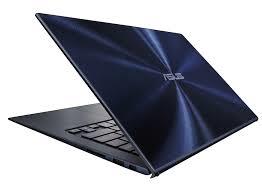 By introducing various products at the mega tech event Computex 2013, Asus had lined up their tablet, laptop, monitor, smartphone and many other categories' portfolio. During the event, the company unveiled a large number of computing gadgets. And some of them are being considered as the best in the industries, where the Zenbook Inifinity is one of them. Asus also showcased their Zenbook Infinity laptop, at this show. Out of large number of new tech-gadgets, this laptop PC from Asus was one of the huge crowd pullers. For having large number of astonishing features, experts are taking this device as the tough competition raiser in market. Asus team not only worked on physical look and built-up of device but also packed it with the best features.

It is claimed to be the world's first ultrabook, which comes with a gorilla glass 3 lid. Though the company, for now has disclosed the complete specification of this device, yet what we have observed about this Window 8 machine is sufficient to describe about it.

Physical look and chassis of device


This is a beautifully designed light weight ultrabook with slim 15.5mm thin body. The company claims it to be 14% slimmer than its previous Zenbook versions. It can be proved by looking at the physical measurement of their earlier ultrabooks. The Asus Zenbook UX51Vz-DH71 can be taken as a ready reference. But this statement appears to be somewhat suspicious when observing its other predecessor - Prime UX21A ultrabook which comes with just 9mm chassis. For more comparisons on physical measurement, still we have to wait for release of this Asus machine.

It offers 13.3 inches IPS multi-touch display with ultra high resolution of 2,560 x 1,440 pixels, to its users. In the present scenario, the IPS and PLS display has become the icon of the best computing devices. And such a higher resolution of device keeps it standing out in the crowd of contemporary smart gadgets. The back of the screen has been built-up with radial brushed finish and the Gorilla glass 3, which is the highlight of the device.

As specified above, the company has exposed very less over the device specifications. But it is confirmed to have a mini display port, and SD card reader as well as two USB 3.0 ports. Besides this, we can also expect most common connectors like HDMI port, stereo speakers, Wi-Fi, Bluetooth, GPS along with some connecting sensors also on this Zenbook model.

The Asus machine runs on Windows 8 operating platform and energized by Intel's next generation 28W dual-core Haswell Core i7 processor. This is the latest Intel chipset, which ensure low power consumption with the least heat emission ensuring the best performance while working on peak load. For luring multimedia lovers, the company also packed the device with Intel's Iris 5100 graphics. This lethal combination of best platform from Microsoft and energy generator from Intel provides the users ultimate working experience. Still we have to wait for arrival of device in market to specify internal storage and memory.


Though the company has not disclosed any information about pricing of Zenbook Infinity laptop yet the high-end features of device predict it to be an expensive offer from Asus. After observing their earlier Zenbook prime UX21A model, which comes at the price tag of $1430, the new Zenbook model is anticipated to be more than $1800.

This Asus Infinity laptop model is expected to be released in the end of September, this year.

Other upcoming companions of Zenbook Infinity


After going through the long list of tech gadgets that were announced from Asus at the Computex 2013 event, I found Asus Transformer Book Trio to be on the top. It comes with dual boot system on Windows 8 and Android 4.2 Jelly bean operating system as well as two Intel processors inside. The second is Transformer Pad Infinity, using HDMI out, capable to push 4K video streaming to the other large digital screen. Besides these, the company also unveiled two more upgrades – with HD and Full HD versions of their earlier Memo Pad tablet. And the next one is FonePad Note FHD 6 Android smartphone, which comes with 6 inches full HD IPS+ display and very powerful Intel Atom processor. Besides these all, the company also unveiled many different sized monitors and a unique featured VivoMouse with a large circular touchpad during the event.