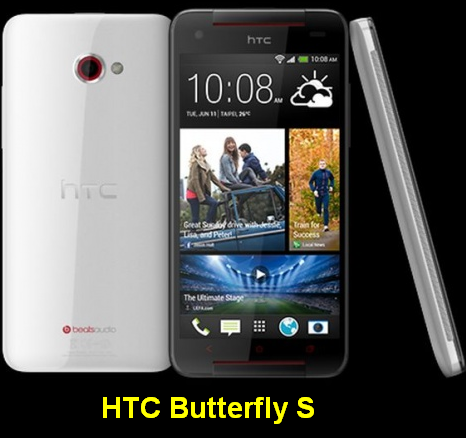 After releasing HTC Butterfly in January this year in the phone markets of the world, HTC has now announced Butterfly S this week. The original Butterfly is selling around Rs.39,500 at Flipkart and around the same price at other online sellers in India. It is likely that the new Butterfly S might be priced around Rs.46,000 in India with the dollar soaring high against the rupee. HTC was founded in Taiwan in 1997. From 2006 onwards, the company has been manufacturing Android and Windows Phone OS based smartphones. The company has been focusing on a variety of innovations including an imaging camera. HTC deviated from the usual megapixels resolution in the camera to ultra pixels technology in HTC One. It has integrated the sound features of its smartphones with Beats Audio sound enhancement. HTC has several firsts to its credit. After introducing an ultra pixel camera in HTC One, the company has now equipped its next generation Butterfly S with this new innovation. It is pertinent to note that HTC does not manufacture smartphone at very short intervals like Samsung. It has less than a score of smartphones in the mid-range and premier range group. HTC has put for sale its Desire series of mid-ranged phones numbering about five. It has a one or two Windows 8 OS based mid-ranged smartphones. HTC Droid, HTC One and HTC Butterfly Android based series are the company's high end featured smartphones. Let us now compare the features, specifications, price and availability of HTC Butterfly S and HTC Butterfly.

There is hardly any difference in the display features of the two phones except that the earlier version had a screen protection by Corning Gorilla Glass 2 and the present Butterfly S has a screen protection by Corning Gorilla Glass 3. Otherwise, both the phones have the same display size of 5.0 inches. The display type in the two phones is Super LCD3 capacitive multi touchscreen with 16M colours. The screen resolution of 1080 x 1920 pixels is the same in both the phones. There is no difference in pixel density as both of them have a pixel density of 441 ppi. Of course, the user interface in Butterfly S is the HTC's latest Sense UI version 5 as against HTC Sense UI 4+ of the Butterfly.

The sound features like vibration, MP3, WAV ringtone alerts, provision of loudspeakers and 3.5 mm audio jacks are the same in the two phones under discussion. Both are also provided with Beats Audio sound enhancement as well.

Both the smartphones has the same features for messaging such as SMS (threaded view), MMS, Email and Push Email. Both use the same HTML5 browser. The Butterfly model has a Stereo FM radio with RDS. However, the radio feature of Butterfly S is not officially known yet.

The Butterfly S is likely to be available in July 2013 in Taiwan, where the company is located at a price around US $766. This works out to around Rs.45,000 in Indian currency. The release to other regions of the world can be expected later. However, there is no official announcement for the same by the company so far. On the other hand Butterfly is available at Flipkart for Rs.39,500. The same phone is priced at Rs37,974 at Kaunsa.com, at Rs.37,999 at Snapdeal, Rs.37,520 at Infibeam.com and at Rs.38,659 at Naaptol.


The new Butterfly S, although appearing similar to the first Butterfly, is quite an improvement over the previous model. There is more power to it by using the same Qualcomm Snapdragon 600 as used by Samsung in its flagship smartphone Samsung Galaxy S4. The camera of the latest Butterfly model has included a 1/3" BSI sensor with a 2.0 micron pixel size and an f/2.0 aperture. HTC has used the same UltraPixel technology in the camera of Butterfly S as it has used it for its flagship smartphone HTC One. HTC has made use of the Google's latest Android 4.2 (Jelly Bean) OS integrating it with HTC's latest UI 5 skin on top. The new smartphone has features like HTC Zoe with HTC Share and video highlights. HTC has introduced a novelty by surrounding the camera glass at the rear with a metal ring. The phone is a little thicker and heavy than the earlier version Butterfly. Otherwise, it has not changed much in its visuals and looks like its predecessor except that it comes in 4 colours now instead of only black of the original Butterfly. There has been quite an improvement in the battery capacity.