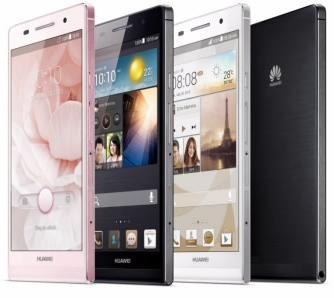 Huawei is the fourth largest smartphone manufacturer in the world as the report of IDC for the first quarter of 2013. The Chinese smartphone maker has ambitious projects to compete with the other top smartphone makers like Samsung, Apple, LG etc. Huawei Ascend P6 launched on June 18, 2013 by Huawei, is supposed to be the world's slimmest smartphone with a thickness of 6.18 mm. It is pertinent to note that the launch date (6/18) of Huawei's new flagship smartphone coincides with the thickness of the phone. The company has not officially announced the price of this smartphone. However, the rumoured price of the phone will be around 1,999 Chinese Yuan as reported on a Chinese website Sina. This price in other currencies like US dollars and Euros will be $330 and €255. With the currently going on devaluation of rupee against the US dollar, the smartphone may cost around Rs.20,000 in the Indian market. The actual price may be known only when the smartphone is released for sale in the market during July 2013. Let us discuss the features and specifications of Huawei Ascend P6.

Huawei Ascend P6 supports 2G GSM and 3G HSDPA networks. It is dual SIM phone using a micro-SIM. The smartphone has been announced this month. It is likely to be released for sale in July 2013.

This smartphone has the body dimensions of 132.7 x 65.5 x 6.18 mm. Its thickness of 6.18 mm makes Huawei an industrial leader in its endeavour to make slim and sleek smartphones. This unique thickness makes Ascend P6, the world's slimmest and sleekest smartphone of the world. It is quite a light weight phone weighing only 120 g. The body of this smartphone is a sleek metallic body. In the words of Richard Yu, the Chief Executive Officer of the Huawei Consumer Business Group, "Building on the success of our Ascend P series of fashion smartphones, the HUAWEI Ascend P6 provides unsurpassed technology and a design that is simply stunning."

Ascend P6 has a display size of 4.7 inches. It sports a capacitive multi touchscreen with 16M colours. The screen resolution is 720 x 1280 pixels. The pixel density is 312 ppi for smart, bright and clear images. The smartphone uses a friendly user interface of Huawei called Emotion UI 1.6. The display has a 'magic touch' fast response even when the users touch the screen wearing gloves. Huawei has made its UI more intuitive taking feedback from over 5 millions users of Huawei smartphones. The company has made the new UI available with enhanced security, Huawei's Me Widget, Magic Touch and SmartReading.

The alert types supported by this phone are vibration and MP3 ringtones. It has a loudspeaker and a 3.5 mm jack. The phone comes with a very good sound quality with Dolby Digital Plus sound enhancement.

There is an internal memory of 8 GB. The memory can be expanded up to 32 GB via microSD card slot. It has very large RAM of 2 GB for smooth functioning and easy multi-tasking.

The primary camera of this smartphone is of 8 MP at the rear. It can shoot images of resolutions up to 3264 x 2448 pixels. The features of the camera include autofocus, LED flash, geo-tagging, HDR, face and smile detection. The video recording capability of this camera is at 1080p @30fps. There is a 5 MP secondary camera in the front of the phone which can record videos at 720p @30fps. The 5 MP front facing camera of this smartphone is the industry first. It has a 4.7 inch high definition in-cell display. This gives the Huawei smartphone a clear edge over the other smartphones. The provision of Emotion UI in the display of this smartphone has provided panoramic shoot and facial recognition in the photography functions of its camera.

The smartphone uses Huawei K3V2 chipset. It is powered by a 1.5 GHz quad core processor. The sensors supported by this smartphone are accelerometer, gyro, proximity, compass and temperature.

The messaging in this phone is done through SMS (threaded view), MMS, Email, Push Mail and IM. The supported browser is HTML5.

There is an FM radio in this smartphone for entertainment. It has A-GPS support and GLONASS. The Java support is provided via Java MIDP emulator. The phone will be available in black, white and pink colours.

Some other features of Ascend P6

This smartphone is equipped with a Li-Po 2000 mAh battery. The talk-time and standby time of the battery is not officially known. But with the power that it has, it is going to give a reasonably good talktime and standby support.

Huawei Ascend P6 is going to give a tough competition to the large display sized smartphones of Samsung Galaxy Mega 5.8 and 6.3 phablets. Samsung Galaxy Mega 5.8 is priced at Rs.24,900. It has a dual core 1.4 GHz processor as against 1.5 GHz quad core processor of Ascend P6. The 1.9 MP secondary camera of Galaxy Mega 5.8 is no match for 5 MP secondary camera of Ascend P6. Similarly, the Galaxy Mega 6.3 phablet with a price tag of Rs.30,900 and 1.7 dual core processor, will be a no match for Ascend P6 phablet with a price tag around Rs.20,000 and a 1.5 GHz quad core processor. The Huawei's smartphone has a great advantage over other smartphones in this category as far as the front facing 5 MP secondary camera is concerned. The right price combined with high profile features of Ascend P6 will attract people to buy the Huawei phone. Huawei smartphone however lacks the next generation 4G networks support.