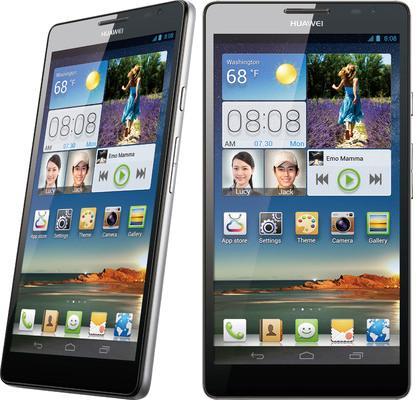 Huawei has launched its new smartphone Ascend Mate in New Delhi on June 18, 2013. According to the Quarter 1, 2013 report of IDC, Huawei is the 4th largest smartphone maker in the world. Huawei has already made a big presence in India. Its revenue from the sales of its mobile phones in India touched $300 million during 2012. Huawei now plans to invest Rs.175 crores in India for its brand building and for strengthening its retail network in the country. It is to invest in India 8 – 10% of its mobile devices revenue. Its target is to ship 10 lakh smartphones in the next six months. The newly launched smartphone has a large HD display of 6.1 inches. This is surely going to compete with Samsung Galaxy Mega 6.3 in a war of smartphones with large screens. Huawei claims that the screen-to-body ratio of 73% of Ascend Mate is the highest available in the industry. Huawei Device believes in breaking the information barriers in order to make the world a better place where every person in this world has access to the new technology.

Huawei strategy is to become customer centric. It aims to provide its customers with user-friendly mobile internet experiences through its ongoing innovation. The company has already completed two decades of its successful journey in the information and communications industry. With its 'Business-to-People' (B2P) strategy, the company sells millions of devices in single transactions to large businesses. At the same time, it also makes its individual devices available directly to millions of people across the world. Huawei has created its niche in the world of smartphones by offering a range of high-quality products for the past several years. Let us now review the features, specifications, price and availability in India of the company's latest device called Huawei Ascend Mate.

The display size of Huawei Ascend Mate is whopping 6.1 inches. The display type is HD IPS LCD touchscreen with 16M colours. This display combined with a very good screen resolution of 1280 x 720 pixels, makes the smartphone to get superb clarity of images and a great accuracy in colour. Added to these great features, we have a 'Magic Touch' in this smartphone to provide enhanced responsiveness even while you are wearing gloves. Its screen-to-body ratio of 73% is the highest available in the industry. This helps to maximize the viewing pleasure of the users, when they read emails and documents or play videos of games. The smartphone has been rightly called a perfect pocket cinema. The screen is protected by Corning Gorilla Glass.

Slim and stylish, but heavy body

The Ascend Mate is 6.5 mm thin at its narrowest part. The makes the smartphone a highly slim and sleek device to look at. It is so designed that it fits accurately and comfortably in a single hand in spite of its large display size. The smartphone has the disadvantage of being quite heavy at 198 g.

This new smartphone in the popular Ascend series of Huawei has a gigantic battery size of 4050 mAh. Huawei makes use of its QPC and ADRX smart power-saving technology to make this battery give up to two days of routine usage on a single charge. The battery of this smartphone charges quickly and at a faster speed than any other smartphone in this category. It saves the users about 30% of battery charging time in this category of smartphones.


The sound features supported by Ascend Mate are vibration, MP3 and WAV ringtone alerts. It comes with a loudspeaker. It is provided with 3.5 mm audio jack. The sound enhancement is done by Dolby digital sound enhancement with 5.1 surround sound.

The internal storage for this smartphone is 8 GB. There is a microSD card slot available to expand the memory up to 64 GB. The smartphone sports a 2 GB RAM for its smooth function and performance.

The Ascend Mate from Huawei runs on Google's Android 4.1 (Jelly Bean) operating system. It is powered by Huawei's Hi-Silicon 1.5 GHz quad core processor. This makes the new smartphone a perfect blend of power and functionality. The users will enjoy a perfect balance of performance and multi-tasking when using this smartphone.

The new mobile from Huawei is equipped with an 8 mega pixel primary camera at the rear with HDR as one of the important features of the camera. The smartphone also sports 1.0 MP front facing camera for HD mobile calling. The smartphone camera has features like dual MIC noise reduction. It is also provided with Dolby sound system and stereo recording.

The Augmented Reality Navigation application of Ascend mate helps users to find and reach their destination without difficulty. The 'Smart Reading' functionality in this smartphone allows you to have a quick reference to dictionaries, Wikipedia and Google Search pages. There is the 'Swift Sharing', which enables users to upload pictures, videos and other files much faster than any other smartphones running on Wi-Fi environment.

Ascend Mate of Huawei supports five frequency bands. This gives the smartphone a global roaming functionality making it one of the most suitable smartphone for the international travellers. It is designed for dual antenna. This supports a high power data transmission. This phone is optimized for maximum ratio combining method enabling the phone for a fast network reception up to 2.5 dB. This provides the smartphone an increase of 20 to 30 per cent of overall network coverage.

Huawei has priced its Ascend Mate in India at Rs.24,900. At this price, this smartphone from the Chinese smartphone maker Huawei, has to face a tough competition with the Korean smartphone giant Samsung, which has recently released its large display sized smartphone Samsung Galaxy Mega 6.3 in the market. The smartphone will be available of several online stores like Flipkart, Infibeam, Snapdeal, Shopclues.com, HS18 etc. along with many modern offline stores like Croma, Ezone and other multi-brand mobile stores in India. However, unless you are very crazy to be the first to grab a new smartphone in your hand, you can wait for a few more days for the price which has to balance itself between demand and supply of the phone. The prices of newly released smartphone tend to come down after a few days of their release. The Ascend Mate will be available in crystal black and pure white colours. The prices checked at mobiles.pricedekho.com revealed that the smartphone is in stock at Snapdeal at Rs.24,899. The phone is available at Flipkart for Rs.24,900. The smartphone comes with 1 year manufacturer's warrantee for phone and 6 months warranty for the box accessories.

Huawei has achieved a prestigious position as a maker of smartphones. During the first quarter of 2013, it achieved recognition of being the world's fourth largest smartphone makers after Samsung, Apple and LG. With an aim to compete with multinationals like Samsung and Apple, Huawei has started launching standard high-end features smartphones in the Indian market. Huawei Ascend Mate and Huawei Ascend P6 are the examples in this regard. The experience of Huawei is gaining a positive support in the Indian market. The large display of 6.1 inches and an enormous battery of 4050 mAh along with 1.5 GHz Silicon quad core processor are likely to wind the smartphone buyers' heart. The new phone is purported to give a unique cinematic experience to its users.

This week, Huawei launched their 6.1 inches 5 point touch display Ascend Mate smartphone in India. This is an Android machine with a quad-core processor and strong 4050 mAh battery. Read this post to get specifications, price and purchase information of this smartphone.