What is 3G mobile internet service?

The mobile internet service providers like Tikona, Delight Net and Airtel have ventured into providing 4G networks in only some selected regions in India. The most popular internet service is through 2G GSM GPRS and 3G networks. 3G mobile internet services give the users high speeds on both uplink (up to 5.7 Mbps) and downlink (up to 28 Mbps). This makes multimedia services like video calling, video on demand, mobile TV and MMS possible and enhances the exciting experience of internet services. The internet connection and data transfer operations of 3G networks work on High Speed Downlink Packet Access (HSPA) technology. The transmission of data over 3G networks is several times faster than the 2G GSM networks. Earlier, users could access audio, graphics and text over 2G networks. In addition to these, now 3G users can also send and receive video content. One must have a 3G enabled handset or a USB datacard to avail 3G connections in the regions covered by service providers.

One of the most outstanding 3G mobile internet service providers in India is the Reliance Communications Limited. With its network spread throughout the country, Reliance provides competitive 3G mobile internet services. So, you can remain connected irrespective of the place where you are. You get uncongested Reliance 3G internet connection with speeds up to 21 Mpbs. The fast speeds of Reliance connections enable superb internet browsing experience and speedier uploading and downloading. The users who are already enjoying 3G mobile services can get add up data plans or packs to use 3G mobile broadband services. Those who have pre-paid connections can recharge their devices with a 3G data pack or a 3G combo pack. Similarly, the post-paid users can also subscribe to a 3G data pack or a 3G combo plan.

There is a provision of "Pay As You Go" default service by Reliance, in case you do not want to choose a plan or a pack. Users can use any 3G enabled handsets to avail the Reliance mobile internet services. They can even use their 3G smartphone as a modem by connecting it to their desktop or laptop PC. The Reliance 3G SIM can be put into a USB data card, which can then be used as 3G mobile broadband data service. In case, the prepaid customers of Reliance presently have GPRS pack, they will be kept at 2G speeds until the expiry of their GPRS pack validity. Afterwards, they will move on to 3G Pay As You Go. The post-paid GPRS users will continue at the 2G speeds till the time they buy a 3G data plan. The Reliance 3G customers get a value added service whereby there is no separate charge for data while watching mobile TV. Otherwise, customers pay over Rs.300 per hour as separate data charges. One is advised to check the usage on a periodical basis to maintain an accord with the tariff plan one has opted for. The common guidelines for checking data usage are as follows: Video streaming (YouTube) uses about 245 MB data per hour. Data used by HD streaming is 308 MB per hour. Normal browsing consumes only about 6 MB of data per hour. If you browse a flash site, the data consumption may be 76 MB per hour. The video chat consumes about 18 MB of data per hour.

There is a "Pay As You Go" pre-paid plan for the users of Reliance 3G internet connection. The users are charged according to the usage made by them. The charges are 10 paise per 10 kb. In addition, there are daily, 3 days, weekly and monthly usage pre-paid packs, the details of which are given below in a tabular format. 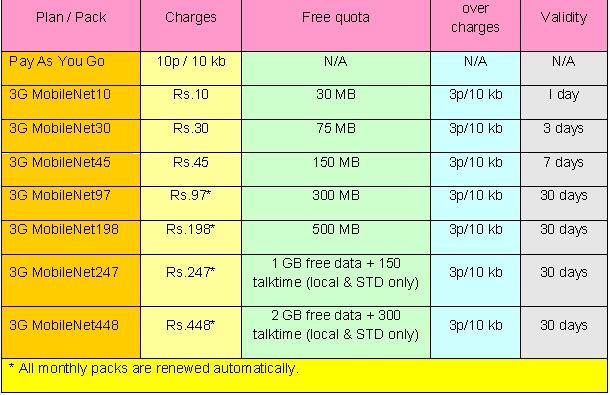 Reliance provides a volume (GB) based post-paid plan called "Pay As You Go". There is no rental for this plan. The charges are 10 paise per 10 kb for data usage up to 50 MB. If the usage within one billing cycle is more than 50 MB, the charges are 1paise per 10 kb for the excess usage. In addition to this plan, the other mobile net plans are given below in the table. The customers can feel free to contact Reliance on +91 9311005674 any time between 10:00AM to 08:00PM for any queries related to the data plans and services.

Though every effort has been made to provide here all relevant information from the official website of Reliance, the prospective buyers of 3G data plans must check the latest news and offers made by the company from time to time. In case of any doubt, customers can feel free to contact Reliance on +91 9311005674 any time between 10:00AM to 08:00PM for queries related to the data plans and services. In addition to the basic price given in the tables above, the company charges service tax @12.36%. The speed of the plan can vary with the model and the speed of the device used for the internet connection, such as, modem, dongle or handset.