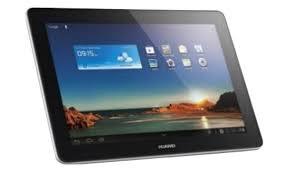 Recently, the leading tech device maker Huawei has announced a complete set of gadgets for its Indian customers. Besides two Android phablets, the company also announced a very high speed mobile hotspot and a Wi-Fi Data card which can download data at very high speed. In the tablets' list, Huawei introduced a 6.1 inch Ascend Mat
Android and MediaPad 10 Link tablet which comes loaded with a 6600 mAh battery and quad-core processor.

Last year, Huawei showcased a prototype (MediaPad 10 LHD) of this Android machine but the newly revealed device comes with some major changes. Both the models are identical in terms of processing units and batteries but the earlier shown 8MP rear-facing camera has now been replaced by a low 3MP camera. Some downgrade has also been observed in its display resolution as well as the system memory which is reduced from 2GB to 1GB.


This is an easy to handle device with a light weight of just 620 grams. It features a 10.1 inch HD display with screen resolution of 1,280 x 800 pixels. It boasts of IPS-LCD panel with 16 million (bits) colors. It runs on Google's Android 4.1 Jelly Bean operating system and is powered up by a quad-core Hi-Silicon processor clocked at 1.2GHz. It has a 16 core GPU. It comes packed with 1GB of RAM and up to 32GB of internal storage.

In comparison to HUAWEI Ascend Mate, it has low graded rear and front facing VGA cameras. The 3MP rear camera is a bit disappointing. For network connectivity, you will find ports for Wi-Fi b/g/n, HSPA+ 42 Mbps DL, 5.76 mbps UL and Bluetooth 3.0.

The device also embeds a 6600 mAh Li-Polymer battery which claims to serve up to 6 hours of gaming or up to 8 hours of video playback backup to the users.

For music lovers, the device comes packed with Dolby surround sound, 3.5mm headset connector as well as dual speakers. Talking of apps, you will find all Google mobile services like Google Play, Main, YouTube, Facebook and Twitter on device.

Cons
• Even at such high price, both the cameras are low in quality

When considering these specifications, the device seems to be over priced at Rs.24900 (around $445). The MediaPad 10 Link tablet is now available online at retail shops like Infibeam, Snapdeal, FlipKart, Shopeclues, Ezone and Croma.


The E3121 Data Card offers up to 14.4 Mbps download speed. With this data card, users can share Wi-Fi with up to 5 devices. The Wi-Fi adapter can transform the laptop into a Wi-Fi hotspot. It includes a Micro SD card slot (for cards up to 32GB) and is compatible with Windows 8/Windows 7/Vista/XP, Linux and Mac. The E3121 Soft is now available online at Rs.1699.

This is high speed packet access mobile hotspot with a multi-mode wireless terminal SOHO. With E5151, users can connect to internet through 3G/2G network or via its Ethernet port. You can also connect the device with the Ethernet interface or the USB port of the computer. It supports HSPA+, HSPA, EDGE, GSM, GPRS and Ethernet. It is not only fast but also reliable to use. It is just 150gm in weight and supports Window XP/Vista/Windows 7/ Mac OS 10.6/ Mac OS 10.5 as well as Mac 10.7. The maximum battery backup is of 5 hours.

This Android based companion comes with a 6.1 inch High Definition IPS+ LCD screen. It has a quad-core processor and 4050mAh battery. It has better camera specifications than the MediaPad 10 Link. It also supports global roaming facility and a number of connectivity options. It is available online at a price of Rs.24900.

Are you thinking of buying a high-end tablet from Huawei? Huawei has recently announced the new Huawei MediaPad 10 tablet which will be available for sale at Rs. 24,990 in India. Read this article for our detailed review of the tablet. Read it and know the features and specifications of Huawei MediaPad 10.