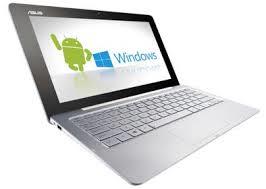 With an interchanging form factor, the ultimately designed Transformer Book Trio is a masterpiece product from Asus. The company unveiled this unique product during Computex 2013 event in Taipei. Out of large number of ultimate products showcased at this mega event, transformer Book Trio is the only gadget that comes with two inter-switching operating systems. It also houses two powerful Intel processing units, double internal storage as well as separate RAMs, allowing its each separate unit to work as an independent full-fledge device. Boasting of 11.6 inches display screen, this Asus machine is built with aluminum metal and owns a detachable display monitor as well as PC station dock. An extra battery inside keyboard dock provides additional power backup to device.


Just like its gaming companion ROG G570 laptop, which was also unveiled at Taipei, the Book Trio convertible tablet PC also features a full high definition display screen. Its screen sizes to 11.6 inches with multi touch screen of 1,920 x 1,080 pixels resolution. It has a full higher definition IPS panel, which allows the user viewing up to 70 degree wide viewing angles.


The company has designed this unique device to show multi personalities. As a tablet, a user can use it for playing games and doing other computing operations. He can convert it to a standard laptop by adding docking station to its base for completing official job. And the third form, which sets the device stand out of the crowd of existing tech-gadgets, is its convertibility to a desktop PC. Yes, you can even connect its docking station to a monitor also to work like a desktop PC. For this the docking station owns a separate processing chip and OS to operate and empowering the device. It means, while going out, a user need not carry both tablet and docking station. He may carry any one of them to work outside.


It carries dual operating system – first latest Android based operating system inside the tablet and the second Windows 8 OS with on PC station dock. You can boot the device by choosing any of the two. But when undock, the tablet runs only on Android. And when you add docking station to the tablet, you may run tablet on Windows 8 also. Secondly, using a physical button, a user can switch in between the two operating systems, any time he needs.


The touch screen tablet has been energized by a 2.0 GHz Intel core Atom Z2580 processing unit where the PC station owns its separate processor, which is also latest Intel based Core i7-4500U Haswell chip. And about storage, both tablet and keyboard dock having their separate onboard storage. The PC station own 1TB of hard disk where the tablet comes with 64GB SSD.


Since this is the combo of two computers in one for having double operating systems, two processing chips, double hard disks, it is expected to a very high priced machine from Asus, which is likely to come in market in the 3rd quarter. For now, the company is silent on pricing of device.

With dual OS, multi-processors, multiple hard disks and three-in-one built-up, this is a completely new designed machine from Asus. No doubt, it will be expensive but the customers looking for innovative products will love to purchase this device even at higher its cost. And its capability of switching the operating system even when the device is running on other platform is awesome. This well designed machine from Asus appears to be a revolutionary combo pack. Its innovative physical built-up with transforming nature will direct other companies to follow Asus' footsteps. We can expect more complicated designs of such computing devices, in near future.