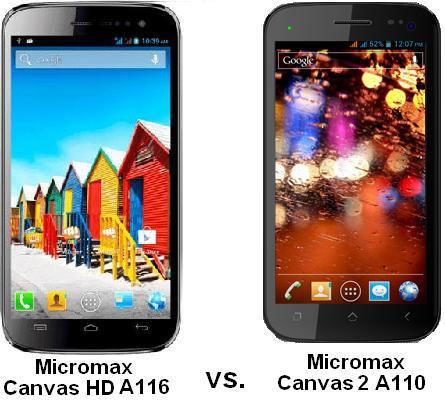 The buyers usually get confused, when there are several options of smartphones before them to buy. The best thing to do in these circumstances is to read the reviews about the smartphones. The buyers ought to make a comparative study of the features and specifications of the two or three smartphones which they are considering to buy before they arrive at a final decision to buy them. Compare the prices of the phones you are thinking to buy. In case, you are in a much hurry to buy the smartphones, you need to look at the availability of the two phones. So, hereunder I have given some of the details of Micromax Canvas HD and Micromax Canvas 2, in order to make the buying decision of the prospective buyers of these two phones easy.

Both Canvas HD and Canvas 2 support the same 2G GSM 900/1800 MHz and 3G HSDPA 2100 MHz network bands. Both are dual SIM phones. AS such, there is no difference between the two with regard to these features. The mobile phone buyers will usually like to buy a phone, which is released later. In this respect, Canvas HD released on February 14, 2013 will be preferred more by the buyers than Canvas 2, which was released in November last year.

Both smartphones has the same connectivity speed of HSDPA, 21 Mbps, but when it comes to HSUPA connectivity; it is 11 Mbps in Canvas HD as compared to 5.76 Mbps of Canvas 2.

Camera and video recording features of the primary camera in Micromax Canvas HD and Micromax Canvas 2 are the same. There is an 8 MP camera at the rear in both the phones with image resolutions up to 3264 x 2448 pixels. Cameras of both the phones have features like autofocus, LED flash, geo-tagging, touch focus and face detection. The video recording capability is at 720p @30 fps. However, Canvas HD has a superior front facing camera of 2 MP, whereas it is the VGA (0.3 MP) secondary camera in Canvas 2.

Micromax Canvas HD is powered by a better hardware. It is powered with MTK MT6589 chipset. The processor is 1.2 GHz quad core Cortex-A7 CPU. On the other hand, Micromax Canvas 2 is provided with a MediaTek MT6577 chipset. It is operated by a 1.0 GHz dual core Cortex-A9 processor. Thus, there is a very big difference in the power of the two smartphones, one running with a quad core processor and the other running with a dual core processor. Once again, Canvas HD has a better graphics processor PowerVR SGX544 than PowerVR SGX531 GPU of Canvas 2. The Canvas HD has sensors like accelerometer, gyro and proximity, when compared to accelerometer and proximity sensors of Canvas 2.

The messaging in the two phones is carried out through SMS (threaded view), MMS, Email, Push Email and IM. Both support the same HTML5 browsers. The two smartphones are also equipped with FM radios.

Canvas HD and Canvas 2 both support A-GPS support. Java is supported in the two phones via via MIDP emulator. Both smartphones are available in black and white colours.

Both Canvas HD and Canvas 2 are equipped with the same Li-Ion 2000 mAh battery. Both provide talk time up to 5 hours. There is a very slight difference in the standby time of the two. Canvas HD has a standby time of 174 hours, as compared to 180 hours of Canvas 2.


You should buy a better smartphone Micromax Canvas HD A116 even if you have to pay about Rs 3,000 more for its better features and specifications, especially the better power and the front 2 MP camera. The other smartphone which can be considered by you at a price around Rs 11,500 is Micromax Canvas 2 Plus Q110A. This phone has features like 5 inches IP LCD display, 1.2 GHz quad core processor, Android 4.1.2 (Jelly Bean) OS, 1 GB RAM, 8 MP primary camera and 2 MP secondary camera. This would compare well with Micromax Canvas HD.

Are you looking for a Micromax Canvas Music A88 manufactured to meet the specific needs of music lovers? Your search ends here, since Micromax has released its Canvas Music A88 smartphone at an affordable price of Rs.8,499/-. The smartphone is not only special for music lovers, but also performs all other functions of a smartphone. Read this article to know features, specifications, review, price and availability in India of Micromax A88 Canvas Music. You can download over 3 lakh songs for free.