Nokia's recently launched Asha series has created a boom in the smartphone market. These phones are perfect for those middle class people who like to purchase only Nokia phones. These recently released Nokia smartphones have really captured the hearts of millions.

Nokia Asha 311 has a full touch screen and is configured by Nokia's Series 40 OS. It has been provided with a 3.0-inch capacitive multi point touchscreen with a resolution of 400 x240 pixels. According to Nokia, the device can display around 262 thousand colors. Asha 311 comes with a 3.2 megapixel primary camera which doubles while recording videos of 640 x 480 pixels resolution. Its camera is configured with tools like 4x Digital Zoom, Fixed Focus, Self-Timer, Auto Exposure and Image Editor. These tools enhance the picture capturing experience. 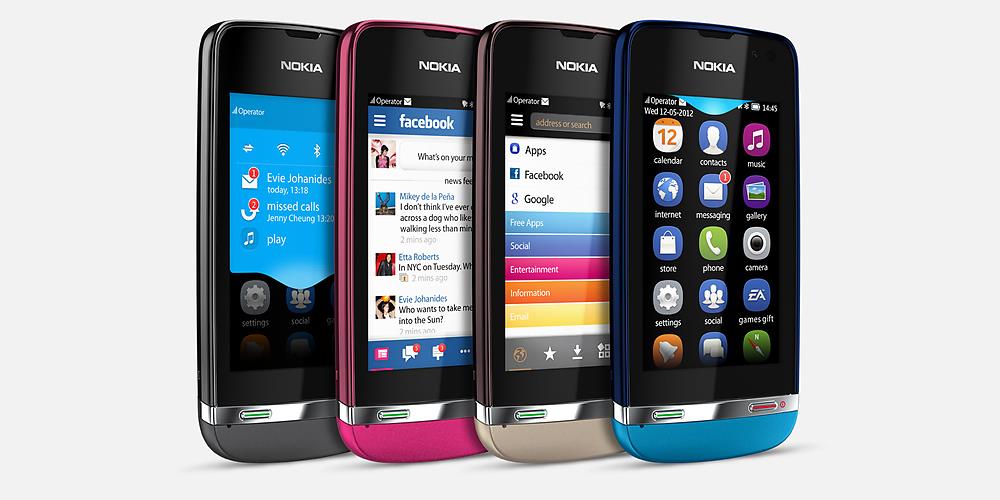 It has a beautiful design with curved edges. There are no sharp corners on its body. A stainless steel strip is situated between the touchscreen and the chin of the device. The phone has a glossy finish to its back panel and looks similar to the "Xpress Music" series launched by Nokia in past. Nokia has captured the hearts of its users by introducing the new Asha 311 which is an impressive combo of a budget phone and a gaming device. It is designed in the form of a bar and it runs on the Nokia OS. The device is embedded with a powerful 1 GHz processor (ARM11) and 128 MB RAM for smooth functioning of applications and games. The phone weighs about 95 grams and hence, is very lightweight to carry or keep in pocket.

This phone is available in Cyan color. However, you can find a Cyan colored Nokia Asha 311 only at Nokia stores. Let's take a look at its specifications in detail.

The Nokia Asha 311 has only 1 sensor to enhance the users' experience. Its accelerometer helps in positioning the screen's view according to users' choice. It's also helpful for the application developers for configuration of games, videos and other programs.

The Asha 311 comes with a 3.0-inch capacitive touchscreen (multi point) with a resolution of 400 x240 pixels (QVGA). Its pixel density is 155 PPI. It features an additional display support, Ambient Light Sensor, Multi Touch, Proximity Sensor and a scratch resistant glass to protect the screen from scratches. According to Nokia, the device is capable of displaying up to 262 thousand colors. 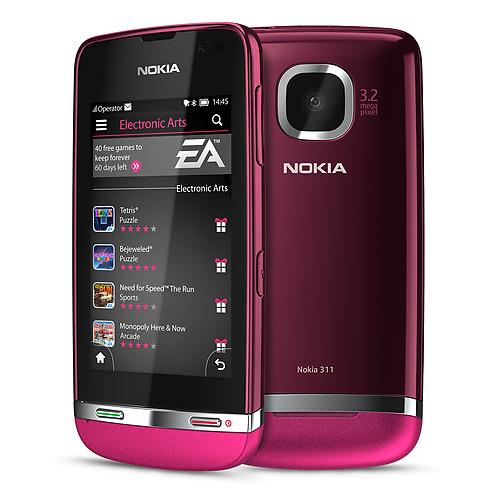 It is a stylish device which comes in a rectangular frame with nominally curved edges. The phone has dimensions of 52 x 106 x 12.9 mm and weighs 95 grams making it both slim and light-weight to handle. It has a stainless steel strip resting between the touchscreen and the chin of the smartphone.

It comes with a 3.2 megapixel primary camera which doubles to record videos of 640 x 480 pixels resolution. The camera supports 4X digital zoom facility, Self-Timer, Fixed focus and Auto Exposure features. The camera has been provided with an adequate color reproduction feature but it fails to provide the proper exposure required in an outdoor shoot. There's a standard option of settings which allows tweaking and adding effects & frames.

The audio quality of the new Nokia Asha 311 is impressive. The phone can be tuned to really high volumes and it also has a FM radio. The Nokia OS embedded in it offers a redesigned music app which enhances the overall music experience. However, it has an average quality Video playback. The Asha 311 can play most of the files with no problems. It supports AVI, MP4, 3GP and DivX/Xvid videos.

The Nokia Asha 311 comes with 140 MB of non-removable storage. The device can store a vast music and video collection because it has an expandable memory card slot. Users can boost its memory up to 32 GB by using a MicroSD card. It has a 256 MB ROM.

The Asha 311 is powered by Nokia Series 40 Full Touch operating system. It is configured with a variety of applications which are given as follows:

• Web: The phone supports the Nokia (proxy) Browser for Series 40.

• Conversations: It has been provided with a Nokia Messaging Service 3.2 for instant messaging, e-mail, SMS and MMS. 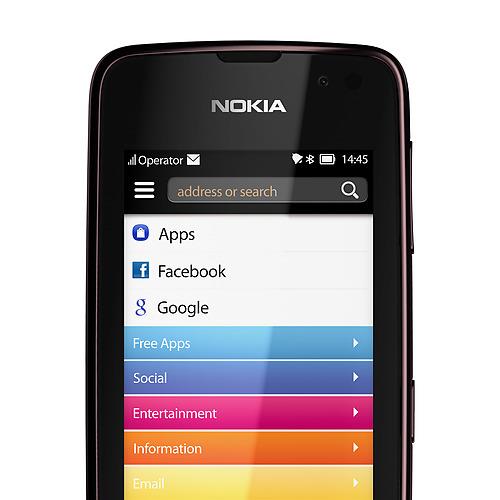 • Games: The phone allows playing first level of a famous game called Angry Birds Lite. The next levels of this game can be purchased on Nokia Store.

It has multiple connectivity features for users to stay connected all time, be it at home, office or on the way. It comes with GPRS & EDGE technology and uses 2G & 3G networks. It comes with a Wi-Fi feature for browsing internet. Files and documents can be transferred by using the micro USB port or the Bluetooth feature present in the device. The phone has a navigation aid called Nokia Maps. This feature takes help of GPS support. The device keeps its users happy and entertained by its inbuilt music player, video player and FM radio. Social networking apps like Facebook, Twitter and Orkut help stay connected with friends and family. They can also be able to share pictures by using Flickr App. The music player of the phone is quite like a Symbian type which supports a variety of audio formats. A dedicated stereo FM radio is more popular among users.

The battery of the phone is very powerful and effective. It has an 1110 mAh Li-Ion battery which promises a talk time of up to 14 hours on 2G network and up to 6 hours on the 3G network.

The price of this elegantly featured and powerful gadget is just Rs.6559. You can order it online from shopping websites like flipkart.com and amazon.com or you can purchase it from local Nokia showrooms. Nokia is providing 1 year manufacturer warranty on the phone and a 6 months warranty on the inside-box accessories.

So, these were the features, reviews, speculations, price and availability of the Nokia Asha 311 which was released last year. I hope that this would be useful to the readers planning to purchase the product.

Micromax A73 Vs Nokia Asha 311 - Specifications And Price

Check out the two smartphones Micromax A73 and Nokia Asha 311 which is better in specifications. We will also tell you the performance of both mobile phones. So read this article to know about the better one for you.