Pros and cons of Trivi.al game

Pros: Simple game to pick and play. Features social friendly options. Many large amount of varieties in the questions.

Out of the box knowledge is the only thing that is important in a trivia based game. Trivi.al an iOS platform based game which is famous for helping Ken Jennings to win Jeopardy gameshow 74 times. This game is really entertaining one which requires a well rounded understanding of history, literature, culture and everything else to make it a perfect game to have on any iOS devices. Let us walk through this interesting game and see its features and gameplay that made me much addicted towards it.

Trivi.al iOS game has brought an exciting feel in my mind as I am one among the trivia niche game fans. This game also features much similar format to other big trivia games. Just like in other Trivia games, the main goal of this game is to take your turn answering to the given set of questions. Here in Trivi.al, you will have to answer those questions within three rounds which may vary in its structure. The three rounds are a general round, a lightning round and finally a bonus round. If you do not do much in general round, don't be sad, as you can cover up your points to win the game through lightning and bonus rounds. 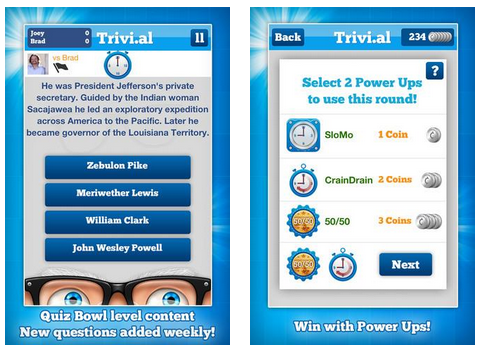 You will be invited to purchase power ups on the very start of each game. Don't panic much, as the powerups are so cheap that they costs only a few coins. Also, you will have lot of coins at the start and you can earn them through the game by playing nicely and smoothly. You will also be provided with ability to perform lots of other options such as eliminating half of the wrong answers, slow down the timer to provide more correct answers etc, these abilities are represented as lifelines. Most of the players will not need those lifelines most of the times, but those who are poor at answering those questions, those having a weak trivia will definitely find themselves depending on them. Anyway's, these lifelines basically serve the purpose of defining the difficulty level of the game in an indirect way.

Trivi.al is the best trivial game that I have ever seen, as I go through this review, I will specify the reasons for that. This game places a lot more features to play with your friends. For that you should be signed in via social networking sites like Facebook or if you prefer you can start playing by just providing your email ID. The game will then load lists of your friends and categorize them into families, coworkers and 'Similar IQ players". Similar IQ players are those of your Facebook friends who are on the same level as you perform in the game. I love this interesting feature of grouping our own friends into three different and apt categories. This made me really easy to find my friends and enjoyed playing the game with them very much.

It is pretty awesome to beat your friends at a trivia game like this. I was not only happy by beating my friends in this game, but I also found out that as I end up winning each games, my in-game IQ level also goes higher, this was yet another motivating feature for me to play Trivi.al. The main goal by featuring this kind of an option is to bring up the genius from this game. But most of the time I could not come up as a genius, because in this game it often brings up questions which are too difficult to get answered.

Although this is a great trivia game, this is a good game only because the questions it asks are that impressive. A very few questions are pretty difficult to answer, apart from those rest of other questions are not really that hard to answer. But still some of the questions were incredibly tough that I got stuck at some occasions whereas some answers were on the tip of my tongue.

Rounding up, Trivia.al is very much interesting game with very impressive variety of topics. Trivia.al is not the most original of Trivia games, but certainly the one I was desperately waiting for. The questions that I found in this were really solid and the format was really simple that anyone could easily understand it. The feature of providing IQ score for the players is also another wonderful reason for you to stick with this game. If you are really addicted to trivia games, I will strictly recommend you to choose this game.

Read about the game Chicken Deep and know what the gam is all about. Read and watch the gameplay of Chicken Deep and read its complete preview along with the pros and cons of the game. Read this article to know the platforms on which Chicken Deep will be released and more..