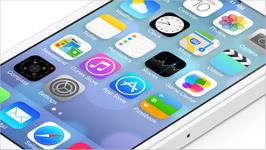 The most awaited iOS 7 was recently revealed by Apple at WWDC 2013. The company claims that iOS 7 has all those advanced features which other mobile platforms lack. There is clearly an improvement over earlier Apple versions. Thus, we can say that iOS7 is going to be the best ever output from Apple.

Apple iOS 7 comes with an overhauled user interface and improvements in Siri app, Control Centre and AirDrop. If you have been eagerly waiting to experience this new OS, you will have to wait for few more days because it is currently available for iPhone developers only. Let us now discuss the major improvements in the latest iOS 7.

The previous Notification Centre is replaced with three separate tabs on the top- Today, All and Missed. Also, the background is no more transparent. There is a translucent background with Traffic and News updates under Today's tab. The All tab includes everything and the Missed tab lets you know what you missed from apps and alerts you. Notification Centre can be accessed by dragging it from top of the home screen or the lock screen in a way you did in your Android phone.

This might be a revenge on Samsung's group sharing feature. Yes, with AirDrop you can send any file to iOS devices near you. It uses either Wi-Fi or Bluetooth for transferring data. The data is encrypted and there are no security issues. All you have to do is to just tap & share the data with other iOS device. This feature is also available in other devices like 5th gen iPod touch and iPad mini. You need an iCloud account to use this application on your device.

With this updated Siri, you can choose a female or male voice and control apps & settings on your phone. Voice search is made on Bing, Wikipedia & Twitter and results are shown in English, French and German languages. The new iOS is going to do a show in some selected cars from 2014. Here, you can control everything with your integrated Siri. 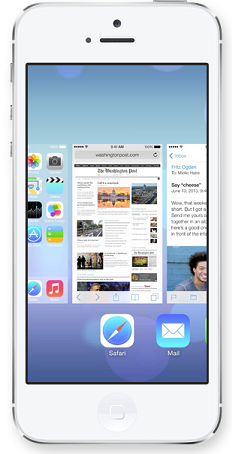 Multitasking in earlier iOS versions is restricted but no such restrictions exist in Apple iOS 7. Apple says, "apps get updates when they run in background without affecting battery life". The bar at the bottom is now replaced with a new interface similar to flip cards in BB Z10. So, with this upgraded feature, users can easily shift between different tasks.

The updated Safari browser gives you a full screen browsing experience and a 3D flip card based view. You don't find buttons while you browse. They will be hidden while you scroll-on and you will find that the gesture based control helps to go back and forward while you search. Also, the separate search bar is removed which enables you to search from the address bar itself.

This upgrade is a major one. Now, you can access thousands of tracks from Google Music, Radio etc. This iTunes Radio is provided for free but it comes with ads. If you want to make it ad-free, you should subscribe to iTunes Match. Apple is going to target audio ads by providing free access to iTunes Radio. One interesting thing is that you can mould the iTunes Radio according to your favourite songs, tracks or albums.

Other features of iOS 7 include updated App store, Control Centre, Camera application and Activation Lock feature for security and weather apps. The new iOS 7 was a big hit at World Wide Developer Conference 2013 due to its amazing features. We are waiting for the worldwide launch of iOS 7 to experience its unique features.

The World Wide Developer’s Conference (WWDC) in early June is expected to be the occasion for launching of iOS 6. In this post, I am highlighting some most anticipated features and software updates for the most awaited iOS 6. Do have a look and gain your knowledge about this upcoming operating system.

Read the review of Flights!, Apple iOS game and also learn tips to play the game.