The special broadband plans are for PCO's, educational institutes in rural areas and limited/unlimited plans for common service centers (CSC's).

In PCO plan, the internet connectivity speed varies between 512 Kbps to 2 Mbps which offers a free data access of 4 GB and the fixed monthly charges are Rs 400.

For Rural educational institutes, there is a broadband plan of Rs 1500 per month where they can get unlimited data download at a speed of 512 Kbps. The data download in this case needs to be relevant with respect to educational purpose only.

In common service centers (CSC's), there are three plans. First plan is of Rs 400 where the data download limit is 4 GB and the bandwidth will be of varying nature from 512 Kbps to 2 Mbps.

Second plan in CSC's is of Rs 999 and the data download speed here will be of 2 Mbps for first 20 GB of data and further the download speed will be reduced to 256 Kbps as this plan is of unlimited download limit.

Third and last plan in CSC's is of Rs 1500 and the data download speed in this case will be 2 Mbps for first 30 GB of data and thereafter the speed will be reduced to 512 Kbps as this plan is of unlimited data access. 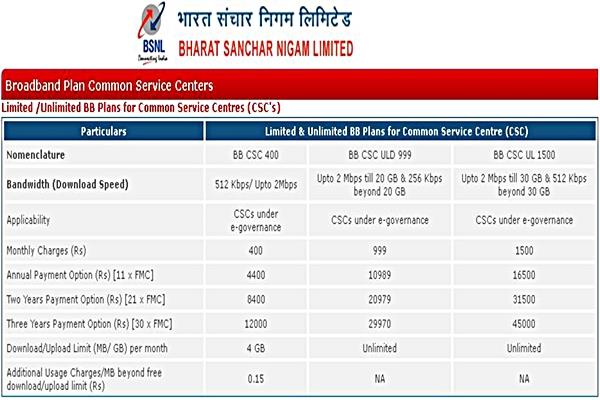 The rural broadband service is offered by BSNL and there are five different plans which include limited and unlimited data connectivity features.

Second plan is of Rs 150 and this plan also has a varying bandwidth of 512 Kbps to 2 Mbps. Here the free data usage is of 1 GB and beyond this limit; the charges will be incurred as mentioned in first plan of Rs 99.

Third plan is of Rs 250 and its data access speed is also in the same range as of first and second plans mentioned above. In this plan a free data usage is of 1.5 GB and till 3 GB the data charges will be incurred at the rate of Rs. 0.20 Per MB. Above 3GB the date will be charged at the rate of Rs 0.10 per MB. This plan has 100 free phone calls within the BSNL network.

The fourth plan is of Rs 500 which is of unlimited data download feature and till 6 GB the bandwidth will be of 512 Kbps and there after it will be reduced to 256 Kbps. This plan includes 150 free phone calls within the BSNL network.

Fifth plan is of Rs 999 and it has a data access bandwidth which varies between 512 Kbps to about 2 Mbps. Here the free download limit is of 20 GB and beyond free usage the charges will be incurred at the rate of Rs 0.10 per MB. In this plan there are 450 free calls within BSNL network.

All the above plans will be charged with service tax and hence at the time of billing the charges will be greater than that of actual plan. For instance, if you have selected a plan of Rs 99 then that it will be charged with a service tax of 10 percent. This means for this plan the billing amount will be Rs 99 plus the 10 percent amount of Rs 99 which is Rs 9.90. Hence the approximate billing amount is Rs 109.

The tabular format of above data plans is shown in the image below: 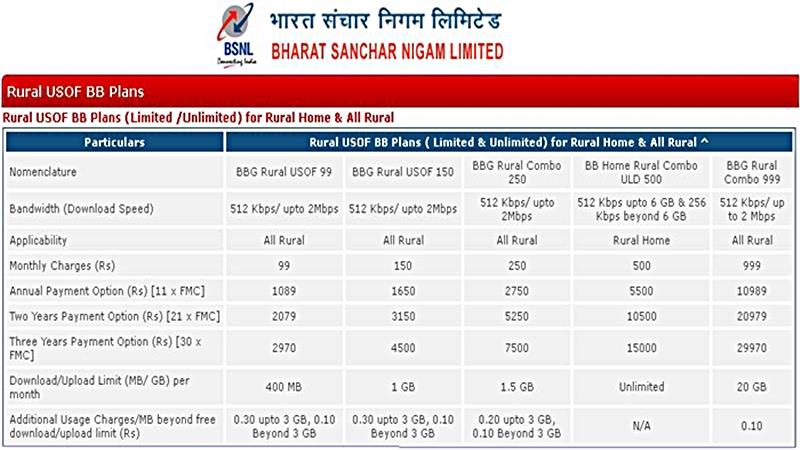 To know more about BSNL data plans follow the article link given below:
The reliable BSNL postpaid broadband data plans in India.