After a great delay in its launch, Wikipad is set to launch its 7-inch Android gaming tablet on June 11. Though it planned to release a 10-inch tablet in October, it moved to a 7-inch and revealed that 10-inch Wikipad will be their next release. You will surely recollect Razor Edge gaming console after looking at the image, but yes, with a reduced size. Featuring Android 4.1.1 Jellybean operating system and being a high end gaming device, it can be a great choice for gamers. With a 7-inch IPS touch screen, Nvidia Tegra 3 processor and 16 GB internal memory Wikipad can surely replace your gaming console when you are out. Removing the dual analog controller makes it a normal tablet and you can use it without any restrictions. As a tablet it offers you all the facilities like web browsing, play music, TV, videos and accessing mails like in a normal tablet. Since this is mainly targeted for children, you can control what they are watching by installing any application like Kite, Kids Place from Google Play Store. It has got a 2 megapixel front facing camera to capture memorable moments as well as to make video calls. But the worst thing is that it doesn't have a rear camera. However, this will not be a notable drawback for a gamer. 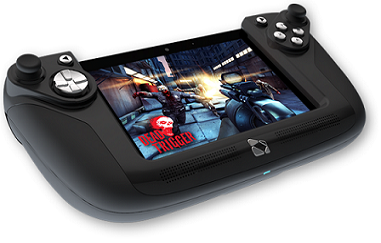 Serving as a tablet and a gaming console, Wikipad has used its patented technology for dual analog sticks, triggers and bumpers to assist you during gameplay. Also, Wikipad comes pre-installed with popular games like Dead Trigger, Hockey Nations and ShadowGun: DeadZone and you can play Sony's PlayStation games and thousands of games available in Google Play Store, Amazon App Store and also Nvidia TEGRAZONE. You can go beyond its 16 GB internal memory with an expandable memory up to 32 GB via SD card. This gaming tablet offers Bluetooth 4.0 and 802.11 Wi-Fi for connectivity and playing multi-player games. Especially, that U-shaped detachable controller offers excellent grip even you play games for hours continuously. Wikipad enables multi-touch feature up to five fingers when used in a tablet mode and the analog interface is a major issue here. Today most of the games are being designed for multi touch screen and it's a big question that how well those games work on analog controls. Detached tablet with 12 core GPU and matches perfectly for your business use with smarter notifications and widgets. You can customise these widgets according to your wish by simple drag and drop mechanism. The 1 GB RAM should have been increased to 2 GB for a better performance while playing high end games like Need for Speed, Assasin Creed etc.

So, Wikipad Inc has planned an US launch tomorrow at an affordable price of $249 and it will be available worldwide this summer. All the optimised games for Wikipad are provided at the official site for reference. With all the above mentioned extreme features, Wikipad is going to be a perfect competition for Razor Blade, upcoming Nvidia's project shield and consoles of Sony and Microsoft.