Karbonn is a popular manufacturing company of smartphones and tablets. From the past few months, Karbonn has launched many smartphones and tablets in market. Till now, Karbonn has made good profits on all its launched tablets and smartphones. Karbonn came into being in the market when it launched its popular TA Fone series. The TA Fone series of Karbonn includes many featured and innovative smartphones. It can be easily said that Karbonn is mainly well known and popular in India for its TA Fone tablets. You might remember that recently Karbonn has launched its a href="/products/1387-Karbonn-A34-TA-FONE-Kommunicate.aspx">Karbonn TA Fone A34 in market which is much received by peoples. Now, Karbonn has again decided to launch the successor of this TA A34 tablet i.e. Karbonn TA Fone A34 HD tablet. This tablet is soon going to be launched in India but at present, it is available on the popular online shopping website of Saholic.com. This featured tablet tablet is priced at Rs. 7,280 only on this online shopping websites. Wow! What a featured budget range tablet. It is hoped that this tablet will hit the markets though its low price tag attached to it. So, let us start by knowing the features and specifications of Karboon TA Fone A34 HD tablet. Here, read the detailed review of this tablet. 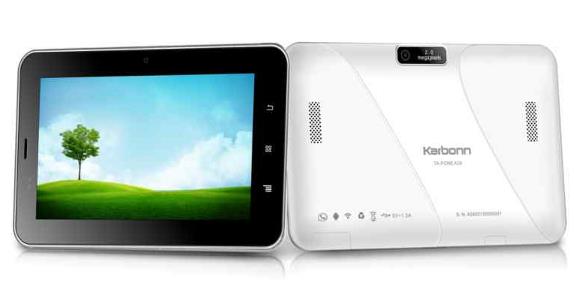 Karbonn TA Fone A34 HD tablet has dimensions of 150 x 75.5 x 9.90 mm. There is hardly difference between in body features of these two tablets. Hence, both have same body design and build. This tablet will not easily get fit into your palm because it has large body. This tablet weighs only 250 grams which is not too much to lift this 7 inch tablet. This reveals that its body design will not disappoint you.

This tablet has a 7-inch capacitive touch screen display which makes the touching experience enjoyable. This tablet comes with screen resolution of 1024 x 600 pixels that allows users to open menus instantly or directly. At last, the display features of this device are quite similar to its predecessor Karbonn TA Fones A34 tablet.

The tablet comes with advance media features like music players, latest installed games and ringtones. Through this tablet you can't enjoy the loud music because this tablet does not come equipped with loud speaker. The media player supports MP3, AAC, FLAC, WMA, WAV and OGG file formats. The tablet comes with 3.5mm jack at the top for good Dolby mobile sound enhancement. The latest installed games include Google Play, Angry birds and Fruit Ninja.You can also download many latest apps in this tablet from internet.

The tablet supports both external and internal storage. The Karbonn TA Fone A34 HD has 4 GB internal memory for storing various files and applications. The external memory of this handset can be expanded up to 32 GB through a microSD card. The device comes installed with 512 MB RAM memory.

Connectivity features of Karbonn TA Fone A34 HD include Wi-Fi 802.11 a/b/g/n, Wi-Fi Hotspot, Wi-Fi Direct, Bluetooth with A2DP, USB port 2.0, GPRS and EDGE. The A2DP connectivity in this tablet may attract many buyers towards it. The 3G internet access in the tablet is also possible. Though its high end connectivity features, you can easily download files fast and browse videos without any problem. 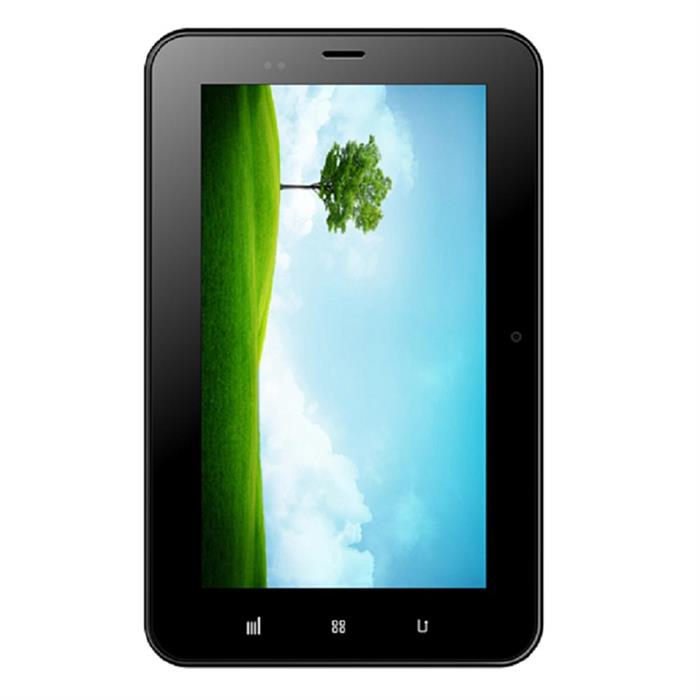 Karbonn TA Fone A34 HD comes equipped with both primary and secondary camera. The 2.0 MP primary camera can take pictures with the resolution of 1600 x 1200. This camera feature of tablet leads me to conclude that it does not come with high end camera features that may disappoint you. The 0.3 MP secondary camera helps in video calls. There are additional features like auto focus, LED flash, face detection and smile detection etc. for enhancing the quality of images.

Karbonn TA Fone A34 HD runs on Android v4.0 (Ice Cream Sandwich) operating system. The 1 GHz Cortex A9 processor and the 512 MB RAM loaded in the Karbonn TA Fone A34 HD helps in the smooth computing performance of this device. This device is a Dual SIM variant tablet. But, it does not comes equipped with QWERTY keypad.

You can send only Email messages through this tablet. However, you can't send MMS and push mail message. We can say that this feature may disappoint you. But, the device offer SMS facility, Voice call, email and instant messaging options. This device comes with HTML 5 browser but it lacks the FM radio. The GPS facility of tablet includes A-GPS support and Google Maps. The tablet is available only in black and white color.

Karbonn TA Fone A34 HD tablet uses a powerful non-removable 3000 mAh Li-Ion battery. This gives a talk-time of up to 20 hours for 2G connectivity and up to 12 hours for 3G connectivity. The stand-by time support is for up to 500 hours for 2G and 3G connections. Music can be continuously played for up to 25 hours with this battery support.

Karbonn TA Fone A34 HD is the company's latest flagship Android tablet. Karbonn TA Fone A34 HD is a high end technology tablet from Karbonn. Karbonn has launched a new tablet within and affordable price. Karbonn TA-FONE A34 HD, successor of the TA-FONE A34 is on sale from online retailer Saholic. This has a 7-inch (1024 x 600 pixels) capacitive touch screen display. So, if you are looking for high end technology tablet in the coming days then Karbonn TA Fone A34 HD tablet would be a better option for you. Other features remain the same including a 1GHz single-core processor and Android 4.0 (Ice Cream Sandwich). It has 2G support, voice calling and SMS through dual SIM card slots. It has a 3-megapixel rear camera and a 0.3-megapixel (VGA) front-facing camera. So, let's wait for its launch in market.