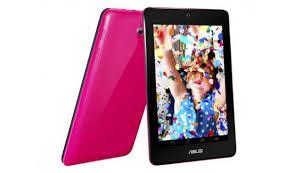 MeMo Pad FHD tablet is the first Android tablet from Asus, which comes with an Intel chip inside. During the show, out of wide range of Android and Windows 8 devices from Asus, the MeMo Pad FHD 10 and HD 7 were only two updated versions of their MeMo Pad tablet. The earlier MeMo Pad, when released with its 1024x600 pixels display, longer battery backup and a front facing HD camera, had also gained huge popularity.

Now, the scenario has been changed and almost all average tablets seem to have such features. So, the company for this time seems adopting a different strategy and offering two upgraded models at different price range and more updated features. Asus MeMo Pad HD 7 version with higher definition resolution as well as IPS display has been kept in lower price range. It is priced at $129, just $20 more than its predecessor. And, the second 10 inches Full HD model will be available in higher price range. For now, to get favorable response from customers, the company has announced prices of its lower version only. It seems that, the prices of higher version shall be disclosed, after viewing public response and observing expert's anticipations about the upcoming device.

The company claims it to be the best multimedia device and it will arrive in market in various colors including white, royal blue, silk and vivid pink. This is a highly portable machine with just 580 grams in weight and 9.5 mm in thickness. It features a 10 inches full higher definition (FHD) touch display with IPS technology, delivering up to 78 degree viewing of angles, to the user. It comes with the screen resolution of 1920x1080 pixels, which is far more than 1280x800 pixels of HD 7 and the earlier Memo Pad's (1024x600).

Earlier, we saw the MeMo Pad with Android 4.1 Jelly Bean OS. But, both the new updated models are running on latest 4.2 versions of this platform. As I said earlier, this is the first Asus machine, which runs on Intel chip. So that, it houses a 1.6 GHz Intel Clover Trail Atom Z2560 processing unit, where its junior runs on ARM based quad-core Cortex chip. It is claimed to be one of the best multi-media machine for having Intel Hyper Threading technology. Hence, it is capable to give rich graphics and gaming experience to its users.

About storage, the device comes with 16GB or 32GB onboard storage, depending on customer's choice and budget. The customers also have an option for expanding the storage via microSD card slot. Besides this, the company is also offering 5GB of free Asus cloud storage, with the device.

This tablet device sports two 1.2 MP front as well as 5MP rear facing cameras for 720p video recording and snap shooting. And, both the cameras have autofocus feature also.

Unlikely, its junior, which carries lithium battery, the big brother owns a very powerful polymer battery, which when playing a 720p video, provides up to 10 hours of backup. For connectivity, you will find multiple ports on device including USB, Wi-Fi, microSD card slot, Bluetooth 3.0 as well as GPS. The Asus Cloud storage provides access to MS office documents for online accessing, creating and editing.

The company offers a protective TransCover, with full HD machine and microfiber interior. It also has stereo speakers with SonicMaster audio technology.


Up to now, no release date and price for the MeMo Pad 10 FHD has been disclosed by the company. The device is speculated to arrive in the month of September, this year.