BlackBerry is a well-known brand for high-end smartphones and tablets. This Canadian company has now come up with an all-new smartphone called BlackBerry Q10. The mobile will hit Indian markets on June 6, 2013.

BlackBerry Q10 is the second handset that runs on the new BlackBerry 10 operating system. Earlier this year, BlackBerry had launched BB10 powered Z10, a fully touchscreen phone for Rs. 43,490. The Q10 was launched yesterday in India by BlackBerry's MD Sunil Lalwani. Most of the smartphones these days feature full touchscreen. Unlike this, BB Q10 is the only premium smartphone in market that has a QWERTY keyboard along with touch screen. So, it features touch-and-type functionality. One interesting thing I noticed is that if you want to play chess, you don't need to fumble for the icon. Just start typing "Che" and the game icon will pop up. Again, that's fast.

Aren't you eager to know the features, specs, price and availability of BlackBerry Q10? Then what are you waiting for? Let us have a look at its full features and specs.


When it comes to design, Q10 is very similar to BlackBerry Bold 9900. The Q10 chassis is made of steel and the back cover is made of plastic. The overall look and finish of Q10 is very elegant. It weighs around 139 grams and is 10.3mm thick. Thus, it is light weight but quite thick. The first words that come in mind after unpacking it are "simple and cute". It also fits pretty well in the hand and is very easy to carry along. 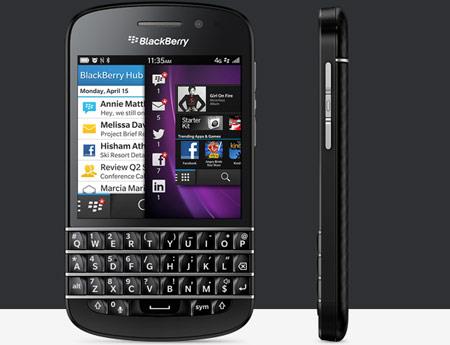 
The all new BlackBerry Q10 features a 3.1 inch SuperAMOLED display with resolution of 720x720p and 328ppi pixel density. The quality of its touch screen is very good and it shows very rich colors. The sharpness is also good.


As we have already discussed above, BlackBerry Q10 runs on the latest BB10 OS. It is the second handset that runs on the new BlackBerry 10 operating system. It is powered by a 1.5GHz Qualcomm MSM8960 dual core processor for smooth running. The area where BlackBerry 10 lacks is apps. In terms of apps, it is not even comparable to other Android and iPhone platforms. It has nearly 1 lakh apps but these apps fail to enhance the smartphone experience. It is expected to deliver high performance with these features.


The device has a 2GB RAM and 16 GB in built storage. I would say that the storage capacity is good in comparison to other smartphones. Most smartphones have an inbuilt memory of 8 GB or 16 GB. The memory can be further expanded up to 64 GB with the help of a microSD card.


The smartphone has an 8MP rear camera which captures videos at 1080p. This camera is located on the top-left corner at rear and is paired with LED flash. The handset also has a 2MP front-facing camera which captures videos at 720p. The front camera allows you to make quality video calls. I would say that the camera is good enough and Blackberry users shouldn't be disappointed with this model.


For connectivity, Blackberry Q10 has a lot of features that include 2G, 3G, Wi-Fi, Bluetooth 4.0 NFC and microUSB 2.0. The device is pretty rich in connectivity features and it offers a very good web browsing experience. Users can access internet through multiple platforms like 2G, 3G and 4G. Another interesting feature is that Blackberry Q10 has a mini-HDMI port for connecting the device to TV or projector.


The new BlackBerry Q10 has a 2100mAh powerful battery which gives a life of around 15 to 17 hours on 3G connection. This long lasting battery saves ample power. You will find that most of the recent smartphones in market last equally long.


Unlike other high end phones which are smart devices first and phones later, Q10 is a phone first. I am saying this because Q10 provides excellent phone features. The most important purpose of phone is making calls and sending messages. This blackberry device is dependable for the purpose. When you make calls, the voice does not distort. Sound quality is good. It has an incredible keyboard. To send messages, you can flick words with just a thumb.


The new Blackberry Q10 is priced at Rs. 44,990. The price is high but Blackberry Q10 promises you excellent features and easy functioning. It is available at all major stores across country. Blackberry Q10 comes in only black and white colors.

The BlackBerry Q10 sports excellent features and specs. It has both QWERTY keyboard and touch screen. It offers fantastic battery life. Should I buy Q10? There is a simple answer to this question. If you are not comfortable using touchscreen phones but want to enjoy rich features, Q10 is the best option for you. The price tag of Rs. 44,990 is simply too much. Most of the people can't afford it.

What's your opinion on this new smartphone from BlackBerry? Comment in the section provided below.