Samsung is a popular South Korean multinational company. Samsung is well known product throughout the world. In India, Samsung is popularly known for its television, monitors, smartphones, tablets and other electronic products. Now, Samsung has expanded its market throughout the world. Samsung is a reputated manufacturing company of smartphones and tablets. With its advanced products and devices, Samsung has achieved a great success in the world market. Samsung is mainly popular for its smartphones and tablets, which include many series like Galaxy, Grand Duos, Mini, etc. Now, Samsung has recently introduced its latest smartphone, that is Samsung Galaxy Mega 6.3 I9205 LTE. This smartphone will launch at the end of July month. Samsung announced that, this smartphone comes loaded with many new and innovative features. The price of the smartphone is not yet announced by manufacturer. So, let us start with features and specifications of Samsung Galaxy Mega 6.3 I9205 LTE smartphone. Also check that, what's new it offers to buyers. 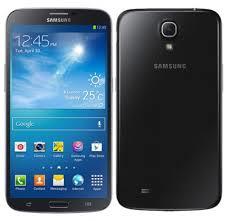 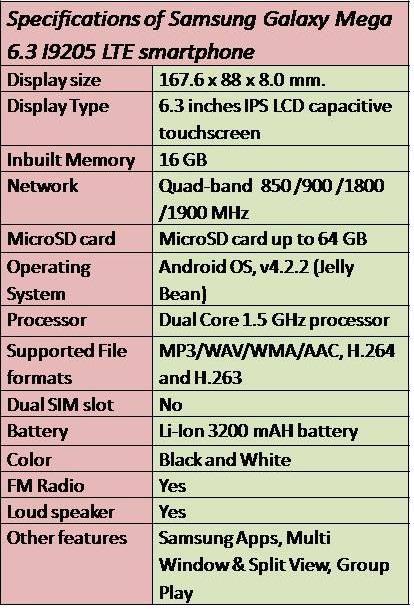 The media feature of smartphone includes a music player, which supports many different formats like MP3, OGG, AAC, AAC+, eAAC+, WMA andFLAC file formats. The smartphone also comes equipped with FM Radio, loudspeaker, ringtones, and games. For sound enhancement, there is a 3.5mm jack is given in the smartphone. The device comes loaded with range of media features. For further entertainment, this smartphones comes loaded with interesting games and apps.

This phone comes with an 8 MP primary camera for clicking high quality pictures. The smartphone comes equipped with both front facing and rear camera. The front camera of smartphone can snap pictures with the high-resolution of 3264 x 2448 pixels, while the 1.9 MP secondary camera can take pictures with the resolution of 1600 x 1200 pixels. This reveals that, the smartphone comes loaded with advance and latest camera features. There are more features like autofocus, LED flash, face detection and smile detection, for enhancing the quality of images. The video capture of the smartphone supports MPEG4, 3GP, H.263, H264, WMV, AVI, MKV and many more different formats.

Galaxy Mega 6.3 I9205 LTE runs on Android 4.2.2 Jelly Bean operating system. This smartphone runs on latest Android operating system. The device is powered by dual-core 1.7 GHz processor. This ensures the smooth performance of the device. For fast multi-tasking, the smartphone comes loaded with 1.5 GB RAM. This smartphone also supports 4G technology and its 3G technology features HSPA upto 42 Mbps. The sensors supported for this smartphone are G-Sensor, Light Sensor, Gyroscope and E-compass. The smartphone does not support the Dual SIM technology, which may disappoint you. Hence, this device is not a Dual SIM variant smartphone. But, it comes equipped with QWERTY keypad for easy typing.

You can send only MMS, Email, Push Mail and IM messages, through this smartphone. The device as far lacks the instant messaging technology. This device supports HTML 5 browser and FM radio. The GPS facility of smartphone includes A-GPS support and Google Maps. The smartphone is available only in black and white color.

This smartphone features a powerful Li-Ion 3200 mAH battery. The battery of the smartphone is long-lasting, which gives talktime up to 20 hours in 2G, while on 3G network, it is 12 hours. The standby time is up to 512 hours. The 2420 mAh battery offers enough backup power for this device.

The price of the smartphone is not yet announced by the manufacturer company in India. At present, it is not available for sale on any online shopping websites. This smartphone will launch at the end of July month. It is expected that, the smartphone will not price below Rs.10,000.

Galaxy Mega 6.3 I9205 LTE is a high-end technology smartphone from Samsung. Samsung is going to launch this smartphone in the market to rival the major manufacturing companies. It features a 1.5 dual-core processor and advance 4G technology. This smartphone runs on Android 4.1.2 Jelly Bean OS for smoother performance. This device also sports a 1.9 MP secondary camera for video calls. Samsung's newest GALAXY MEGA with LTE, delivers a mobile experience, that is larger than life! The majestically wide 6.3 inch HD screen showcases the videos beautifully. So, if you are looking for high-end technology smartphone in the coming month, then Galaxy Mega 6.3 I9205 LTE smartphone would be a better option for you, but the last choice is yours.