Owned by Times Internet Limited, a subsidiary of Times, Gaana.com beta has released its apps this year for the top four mobile platforms; BB, iOS, Windows and Android. So, India's largest music website, Gaana has moved to your mobiles and you can have all the masti from your smart phone itself. Let's have a look at the features of all apps in detail. 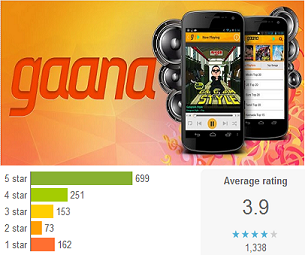 You can listen to your favorite songs in Hindi, Tamil, Telugu, English and 21 other selected languages, no matter where you are and absolutely for free. You can search and make playlists of your favorites from over one million songs available. Also from this app for Windows, you can share your tracks to social media like Facebook, Twitter or via email. You can easily install this 2 MB app and the available version for windows on app store is v 1.0.0.0. Raaga app works only with Windows 7.5 and Windows 8 versions. This awesome app has some negative feedback that it struck suddenly while playing old songs. Also, users are waiting for new updates of songs and a download option; let's wait for a positive response from them.

Gaana for iOS is simple with user friendly interface and you can login with your Facebook id and get started. Home screen wishes you with music list 'Gaana Top 20,' 'US Top 20,' 'EURO Top 20' and much more under that playlist tab. The bottom position is occupied with a menu consisting of 'my zone,' 'search,' 'Home,' 'Discover' and 'Settings.' You can search your favourite song from their one million available songs and know what your friends are listening through 'discover.' You can add a song to your favourite list while listening and even turn it to radio station via Radio mode. iOS app has got less negative reviews than that of windows.

This app has got all the same features which are present in Windows and iOS app. Here it is a version 1.2.0 and occupies a 4 MB space on your device. It should be improved in terms of displaying relevant search results. Yes, when you search for your favourite song or album, you'd probably get some irrelevant results. Also there are many negative reviews and feedback on this app for Android. App works little better even on a 2G network and while you are playing a song you don't have the ability to rewind or fast forward it and this can be a major drawback. Users often claim that it crashes in the middle and also they don't get the latest songs on this app similar to what they get on a PC.

You can have this app only if you have a Blackberry Z10. And it supports all carriers and can be accessed from all over the world. This too has got the same features that iOS, Android has and also have some negative review from users. This app on BB doesn't provide old songs and users are eagerly waiting for a better update in terms of availability of songs and share option.

So, it is clear that 'Gaana' needs a better upgrade soon on all mobile platforms to increase its active users. Hope we would soon get a better update in coming days.

Read How to create ringtones for iPhone?

Apple recently announced that the upcoming iOS 6 is going to support Face Time over cellular data plans. To know more details about Face Time on cellular connections go through this article. I have also given a comparison of Face Time with Wi-Fi and Cellular Connections.

Did you accidentally delete any files or contacts from your iPad? Or, did you lose all data on the iPhone when you did a jailbreak? Here is an iPhone recovery software for the rescue.