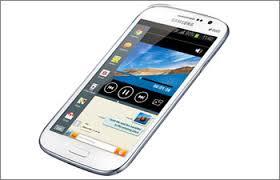 Galaxy Mega 5.8 is the extension of 5.5 inches Galaxy Note phablet, which earlier got a huge popularity and fetched good revenue to company's pocket. To encash the success of their earlier smartphone, the company for once again, is betting on its enlarged version. But, with more advanced features like Touchwiz user interface and 'Air View'. And, the latest Jelly Bean operating system and strong battery of Mega 5.8 are the plus points of the device.

The company has also unveiled another companion of this handset, with larger 6.3 inches display size, which is supposed to arrive in the market, later on. Both most awaited devices are already getting huge positive response from the customers and expected to raise a good revenue for this leading manufacturer.

Both the Samsung handsets, offers split screen functionality for different applications. The user can use its in-built 'Air View' feature to preview the images, gallery and emails, even without opening the handset.

This new Galaxy series smartphone features a 5.8 inches display with screen resolution of 540 x 960 pixels. Since, this is a dual SIM device so, it supports both 3G network as well as phone call features.

The device runs on Google's latest operating system, Android 4.2 Jelly Bean, along with Samsung's own Touchwiz user interface. It houses Intel's dual-core processor, which clocks at 1.4GHz, with 1.5 GB of RAM and 8GB of onboard storage. The customer has option to expand its storage up to 64GB, via microSD card slot, which is available on board.

The large-sized phablet owns two cameras, first is 8MP primary rear facing camera for video making and snap shooting, where the other is 1.9 MP front face camera for video chat. The company packed the device with variant connectors including GPS, Wi-Fi direct, Wi-Fi 802.11 a/b/g/n, USB 2.0 and it also supports NFC.

Its strong 2600mAh battery is capable to provide the users, longer backup support.

Samsung set the price of Mega 5.8 at Rs 25,100, that is $445, for Indian market and now it is available to buy through Vodafone and RCOM. But, the device is supposed to arrive in US market, in the next month.

Both the retailers are selling the devices, with providing special offers to their customers. RCOM is offering 2GB of data per month up to 3 months and unlimited access to Twitter, Facebook and WhatsApp, where the Vodafone is giving 2GB data downloading on 2G and 3G per month for up to 2 months.


• It has a large display screen and the latest Android platform
• Working on Samsung's front user interface Touchwiz, will be a unique experience for the users
• Support to NFC and 3G network
• Dual SIM support with facility to make calls as well as work on tablet

• All the tablets in the market with minimum 5 inches or more display are carrying at least 720 x 1280 pixels of screen resolution. Its 540 x 960 pixels resolution, stands lower to expectation.

The company says that, this large display sized handset will meet the tech lover's demand and will be very helpful in contributing to changing their lifestyle. In fact, the large-sized phablets, which are the combination of smartphones and tablets, are really getting preference to normal smartphones. In this case, a customer does not need to spend money for a tablet and the smartphone, separately. The company officials also say that, the Indian users love to spend more time with such devices and like to use large screen display.