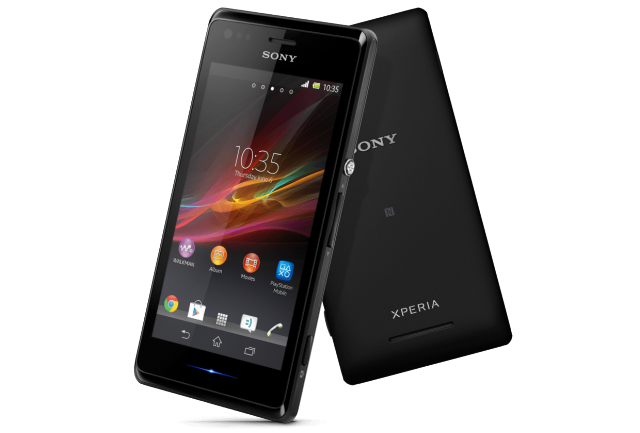 The dimensions of Sony Xperia M smartphone are 124 x 62 x 9.3 mm and it weighs only 124 grams with battery. The smartphone has a slim and smooth design. This bar shaped smartphone comes with an elegant design and is 9.3 mm thick. Weighing only 124 grams, this device is not too heavy for a mid-range smartphone.

The new Xperia M smartphone features an advanced 5 MP high clarity camera which comes with many supporting features like 4x Digital Zoom with Auto-focus and Dual LED Flash. The smartphone has both rear and front facing cameras. The rear camera can take pictures with a high resolution of 2592 x 1944 pixels. The video formats supported by the camera are MP4 and 3GP. The 0.3 megapixels front facing camera with 640 x 480 pixels resolution can be used for video calling. Sony Xperia M smartphone supports general 2G network- Quad-band GSM 850 /900 /1800 /1900 MHz and 3G technology - 3G HSDPA 850 / 900 / 1700 / 1900 / 2100. The device also comes loaded with A-GPS and Google Map application.

Like Sony Xperia M Dual, Sony Xperia M smartphone allows you to send MMS and emails but not push mail messages. This handset comes packed with a range of impressive features. It targets the mid-range smartphone user segment. The smartphone supports HTML 5 browser for surfing.

The smartphone will be launched in the end of July. Its price has not been announced yet but it is expected that it won't cost less than Rs. 10,000. It will be soon available for sale in Indian stores and online shopping websites from where users can easily order and buy the device. At present, we need to wait for its launch.

The new Sony Xperia M is one of the best smartphones in the Xperia series. It is expected to be a medium-price phone. It is announced that the smartphone will be launched next month. It will surely give a tough fight to its competitors in market. With latest smartphones from popular companies like Samsung, HTC and Nokia, the competition will be stiff. The Dual SIM variant of this model will also be launched with Sony Xperia M. It is expected that both these smartphones will be priced above Rs. 10,000 in Indian market. Sony Xperia M runs on latest Android operating system which is upgradable. It is powered by Dual Core 1 GHz Qualcomm Snapdragon S4 Pro processor. Looking at these features, I can definitely say that this smartphone will do well in world market.

Will you please tell me the price of Sony Xperia M Smartphone.

If you would have added some more pictures of Sony Xperia M It could be better.So from next time please try to add some more images.It makes the article more creative and attractive.It also increases traffic which will be good for you.

My phone Sony m 3g videos are not running. what is the reason and how to resolve it.