Spice have recently evolved with the release of the Spice Stellar Pinnacle Mi-530 smartphone, earlier this year. The features of the handset are big 2550 mAh battery and an elegant 5 Megapixel front facing camera, which is implemented for the very first in an Indian handset. The features and specs of the Stellar are discussed below, to make the folks understand the versatility of this gargantuan smartphone. 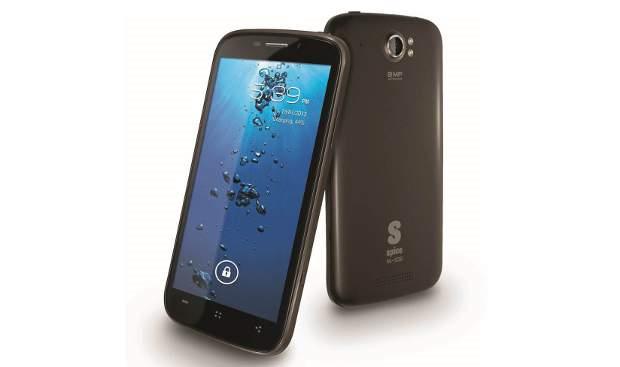 Design: The Spice Stellar Pinnacle Mi-530 smartphone is a nice handset not only in terms of screen size, but also in terms of height, weight and overall looks. The handset is not fragile, and even if subjected to drop, can escape from any kind of scratches due to the hefty looks and provides good durability to the phone.


The display is a 5.3 inch screen, enclosed by a black tempered glass for safety purposes. There are three capacitive touch buttons located right below the display and pressing these buttons involves a different method, when compared to other phones. The chrome speaker grill and, houses a small notification LED, front camera and sensors located above the screen. There is no Spice branding on the front. The screen is kind of beveled at the edges, making the surface smooth.

Display: The Stellar sports a 5.3 inch qHD IPS screen, with a resolution of 540 x 960 pixels, offering a pixel density of 206ppi. The viewing angles were flexible and the under sun visibility of the phone was convincing. Videos and pictures looked good. But, not crystal clear as in AMOLED display screens. In contrary, the AMOLED display screens offer saturated colors, which adds more brightness and picture clarity.

Software and user interface: The Spice Stellar Pinnacle Mi 530 runs on an Android OS, Ice Cream Sandwich version 4.0. This is upgradeable to version 4.1 of Jelly Bean OS. The handset sports three capacitive buttons a Menu key, Home button and a Back key. Long pressing the Home key opens the app-switcher for switching between open and before accessed apps. As we pointed out in our earlier reviews, we find the contextual menu button redundant. Perhaps, Spice could allow users to use the menu button exclusively, as the app-switcher, on the lines of newer HTC phones.

In addition to standard features, the phone also features certain gestures similar to the Galaxy S3, that can be enabled via the Call Settings menu. These include Direct Call, which automatically dials a number on the screen, when you pick up and bring the phone closer to the ear. And, Intelligent Answer, that lets you pick up a call by bringing the phone close to the ear, flip to mute, that mutes the phone if it is flipped, when a call comes.

The Video Player in this smartphone also features Pop-up Play, that allows the user to watch videos simultaneously, while performing other tasks.

This smartphone also offers Boot Acceleration, that allows you to manage apps running in the background in order to make the phone boot up faster.

Processor: This smartphone is powered by a dual-core processor on a MediaTek chip at a clock speed of 1.2 GHz. The handset also accounts for a 1GB RAM onboard and a PowerVR SGX 531 graphics processor.

Camera: Stellar smartphone sports an 8 MP camera in the rear end, which promises for autofocus. Though, the autofocus camera takes quality pictures in daylight, but there was a default lag. The bitter inference made after shooting, the images was the pictures appeared to be shaky and inconsistent. The LED flash has made a good fortune to the handset by recording HD videos. But, the quality of the captured videos was poor and not satisfactory to the folks.

The camera offers a variety of scene modes and color effects, white balance modes as well as a HDR mode. The camera also offers a Panorama mode and a burst mode with the option to click 4, 8 and 16 consecutive shots. The front camera is very much favorable to the users in supporting video calls.

Memory: There is 16GB of internal storage, which is expandable up to 32GB via a micro SD slot.

Sound: The speaker delivers average sound at increased volume levels and there is a distortion in the sound at times. This happens due to the presence of speaker grills at the back end of the phone. The headphones, that comes with the phone also offer average quality sound output.

Battery: The battery of the handset is standard and user-friendly with a capacity of 2550mAh. The battery supports for long-term usability of the handset for various activities includes 1 to 1.5 hours of phone calls, two email accounts with push notifications, screen at maximum brightness, playing some music and video clips, Twitter notifications and Whatsapp chats. Altering these settings might help in running the phone for a longer duration, with the consumption of battery power.

The phone also offers a power saving mode, which can automatically save power, when the battery is low by actively turning off the Wi-Fi, GPS, and dimming brightness of the screen. The battery is one of the blissful features offered by the Stellar and people are definitely going to be dumbstruck with the outstanding performance.

• Hefty to carry
• Poor quality of speakers, resulting in interruption of sound.

The handset has successfully ventured into the market and is available at a cost of Rs.13,999, which is expensive. But, worth it for a handset with such tremendous specs.

Every handset has its own advantages and disadvantages. In that line, Stellar contributes more beneficial features to the folks than cons. Such features are vivid display screen, compatible user interface and a high quality battery, which is enduring. The weight and speaker quality could be an issue to its folks. But, Stellar is definitely to overcome all the hurdles in establishing itself, as a successful handset.

Micromax Canvas 4 A117 and Spice Pinnacle FHD Android smartphones are likely to release in market with almost identical specifications and features but at different prices. Both 5 inch devices come with quad-core processor and up to 32GB of onboard storage. This post covers comparison of specifications and features of these two Android smartphones.