Spice has recently unveiled the 3G SIM calling tablet, called the called the Spice Stellar Slatepad tablet. As per the information leaked in the official websites, this Slate pad is expected to come with a profound voice functionality feature. This handset is the first one from the Spice to feature 3G and voice calling support. The table has launched as a competitor to the Celkon CT888. 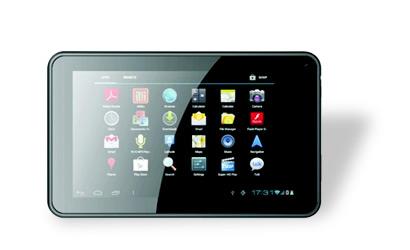 Display: The display of this SlatePad handset is a sleek 7.1 inch capacitive multi-touch screen and this high-quality screen offers a standard resolution of 1024 x 600 pixels.

Memory: This handset from the Spice manufacturers accounts for an internal storage of4GB, which is expandable up to 32GB via a microSD slot. In addition to these, the handset is provided with a 512MB RAM.

Processor: This tablet device is powered by an efficient single core processor, running at a clock speed of 1GHz.

Camera: The tablet sports a 3.2 MP camera in the rear end, with exclusive features like night vision and autofocus. There is also a 1.3 MP front camera available with the handset.

Connectivity: The tablet is also quite rich in terms of connectivity options with Bluetooth 4.0, GPS, 3G and Wi-Fi.

Battery: The Spice Stellar Slatepad Mi-725 tablet offers a 3000mAh power packed standard battery, which is durable and of good quality. The battery holds good, offering a good backup for standby and talktime.

The Spice Stellar Slatepad Mi-725 has been priced at 9999 INR and is expected to hit the markets, shortly. The handset with minimal hardware and software specifications, is quite expensive for the folks. With this high price, the tablet should offer at least a dual-core processor.

Although, Spice had launched its first tablet, the MiTab as early in September, 2011, it was not really able to survive the competition with the other competing handsets like Micromax, Zync and Karbonn. The company was again back with a bang, with its 10 inch tablet, the Spice Stellar Pad Mi-1010, which was very much convincing and impressive. It was launched in January,2013 and is powered by a 1.5 GHz dual-core processor, with 1GB of RAM. It was one of the first Android 4.1 Jelly Bean tablet from an Indian device maker. The Spice Stellar Pad also included a 3 Megapixel rear camera and a VGA front shooter. The tablet came with a large battery capacity at 7600mAh

Its competitor, Karbonn Tafone A37 comes with 1GHz dual-core processor. But, with inadequate resolution of 800 x 480 only and only a 2 Megapixel camera. Although, both the devices share the same price. The handset is not likely to become a successful phone and will just serve as an average handset with limited features and specs. The users would certainly opt for its competitor Celkon CT888, which comes with many value-added features.