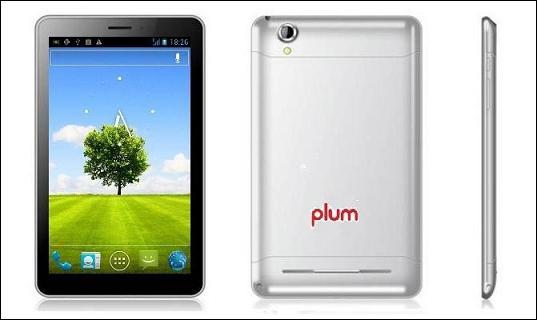 Plum brand might be unknown to you. But it is really a good sensation manufacturing brand. It has manufactured hundreds of smartphones and tablets and interestingly, all of its sensations runs on Android platform. Android Ice Cream Sandwich and Jelly Bean are the basic operating systems, that runs on most of the smartphones and tablets of Plum brand. By giving a magical touch in its products, Plum has a good reputation in market places. The far most spec aspects on which, the brand does not compromise are battery, screen size, data connectivity means, weight and SIM support. The battery is mostly with over 3000 mAh capacity. Screen is always big in tablets and has a good resolution and pixel density. Data connectivity can be inaugurated via many mediums like Bluetooth and GPRS. Almost all the Plum's tablets supports a SIM slot and many, dual SIM slots. The weight is more often less than 200 grams and this is the main aspect among all, which the brand takes heed upon.

Among the top tablets from Plum, lies Z710. The tablet is pretty awesome. It has curved edges and sharp looks. See the detailed review of Plum Z710 tablet.

Plum Z710 is a dual SIM tablet, which means GSM+GSM with dual Standby. It weighs 150 grams and holds the dimensions around 195 x 120 x 9.9 mm .The touch screen of the tablet is 'Capacitive'. Also, the tablet is available in 2 color choices, white and black. White color suits perfect and is recommended.

This tablet has a 7.0 inch TFT capacitive touch screen, with a resolution of 600 x 1024 pixels and 170 ppi pixel densities. Moreover, it is a multi-touch screen with 262K colors. Accelerometer, Proximity, Compass sensors are included in it for better and smooth touch interface.

Plum Z710 has Android v4.1.2 Jelly Bean operating system. Though, the Jelly Bean is the latest OS from Android, v4.1 is the predecessor of v4.2 and this fact can not be changed with the tablet, that is no upgrade of OS is supported. The tablet is powered by a dual-core processor, clocked at 1GHz. Also, to enhance the performance speed of the tablet, it preloads an MTK 6577 chipset.

Plum Z710 has much to show in this aspect. First of all, it supports a 3.2 MP primary camera with 2048 x 1536 pixel resolution. Also, it supports a 1.3 MP secondary camera with 1280 x 1024 pixel resolution. With the rear camera, you can shoot videos, capture environment and with the front camera, you can chat with your buddies and call them live and much more. The cameras support many video formats including MP4, H.263, H.264 and also, feature Geo-tagging and Face detection.

Plum Z710 has an internal memory of 4GB. The storage can be further expanded up to 32GB by using a microSD card. Talking about memory, it has also 1GB RAM. There is no expansion available for memory.

These two aspects seem to be interesting for being in a tablet. Don not mind, as Plum Z710 features a phonebook and call log consisting of missed calls, received calls and dialed calls. Messaging is the main concern and for this, the tablet features SMS service, SMS threaded view, MMS, Push Email and instant messaging. It also supports many social networking services including Facebook, Twitter, Google Search, Maps, Gmail, YouTube, Calendar, Google Talk, Picasa, etc.

Plum Z710 equips a Lithium - Ion battery with 3000 mAh capacity. This battery is long-lasting. It provides a talktime backup up to 7 hours and up to 420 hours on standby. The package contents of the device includes Plum Z710 tablet, battery, charger, earphone, USB cable and a user manual for quick accessing.

The date lies in the midst of February 2013 that, Plum launched its Z710 tablet. It was wholly and solely available in market by the end of April 2013 and price of the tablet is said to be around Rs.10,000.

My view regarding the tablet
Though, I have not been a user of the tablet. But, I may personally tell you that, Z710 is really awesome. It is full of pros. But, not only had that, as my friends informed me about a great con of this tablet. The tablet features bad touch. Otherwise, it is very user-friendly. There might be many games and apps for the tablet. And in fact, being an Android based tablet, Plum Z710 must be preloaded with Google Play Store. Talking about the brand Plum, I tell you it reminds me of a crazy quote, "I miss the time, when Blackberry, Lemon, Plum and Apple were just fruits".

Interesting fact: This can not be wholly and solely, called as an interesting fact of the smart tablet. But somehow, the fact is Plum Z710 is currently not available on any online store.

Plum Z710 is a very good tablet and is suggestible for buying. It is a worth buying tablet and a user can use it as a smartphone as well as a tablet. There are many other features, which the tablet offers. Thereby, this was all about Z710 tablet from Plum. If you find any wrong or incomplete information in the article or want to know more about it, then feel free to inform me in the form of responses to the article.

is this for real? strange that it is bad to the touch? very weird indeed.