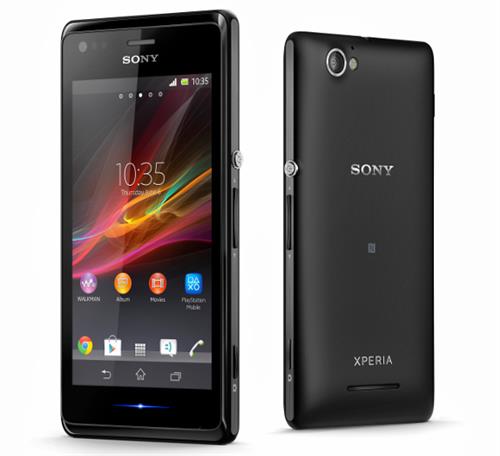 The dimensions of Sony Xperia M Dual smartphone are 124 x 62 x 9.3 mm and it weighs only 124 grams with battery. The smartphone has a slim and smooth design. It is easy to handle or carry this smartphone on move.

Sony Xperia M Dual uses a powerful non-removable 1750 mAh Li-Ion battery. This gives a talk-time of up to 10.3 hours for 2G connectivity and up to 13 hours for 3G connectivity. The stand-by time support is for up to 552 hours for 2G and 3G connections. Music can be continuously played for up to 35 hours with this battery support. Life of the battery can be increased by using many battery saver apps.

This smartphone allows you to send MMS and emails but not push mail messages. This is in line with the other smartphones of Xperia series. This smartphone is available only in red, black and white colors. It supports HTML 5 browser. The new Sony M Dual smartphone also supports A-GPS and Google Maps.

The smartphone will be launched in the end of July. Its price has not been announced yet but, it is expected that it won't cost less than Rs 10,000. It will be soon available for sale in Indian stores and online shopping websites from where users can easily order and buy the device. At present, we need to wait for its launch in the market.

Sony Xperia M Dual is one of the best smartphones in medium price range. It will be launched next month. The features and specifications of this smartphone make it unique and it will give a tough fight to the latest handsets from manufacturer companies like Samsung, HTC and Nokia. The smartphone is powered by a Dual Core 1 GHz Qualcomm Snapdragon S4 Pro processor which makes its performance faster. This latest smartphone from Sony runs on the latest Android operating system which is upgradable. Looking at these features, I hope that Sony Xperia Dual M smartphone will do well in market.