You all might have or might be playing Rope Escape. It is an Editors' Choice game for Android based smartphones available on Google Play Store. To be an Editors' Choice game is the dream, dreamed by all the Android game/app developers. Rope Escape is developed by Deemedya m.s. ltd., a top app developer on Play Store and the developer of Trial Xtreme 3, Trial Xtreme 2, The CATch!, Age Of Wind 2 and Zombie Smasher! game. Basically, Rope Escape is a thrill based running game. We can't call it a run but while looking deeply in its gameplay structure, it is actually! The game has attracted more than 100M Android games and is yielding more and more, every day, every week and every month. Interesting, then what should be its storyline, gameplay? Let's check out a detailed review of Rope Escape game.

Category: The developers of the game have put it under Arcade and Action category on Google Play Store. It is all due to the thrill, adventure and addiction which Rope Escape offers.

What's new: The latest version of the game i.e. v 1.17 boasts newness. There is an improved compatibility with Samsung Galaxy S4 and also the graphics. Many minor bugs have been fixed.

Size: Rope Escape is very free to download and is sized around 22MB. You can download the game from Play Store.

2. Many characters to unlock and use in the game. All are colorful.

3. Collect power-ups or buy them in store for coins.

4. Collect coins that are bigger than the character you use.

Cons
• Too addictive
• Too often 'Rate the game' dialogs

Now, you may have understood what the game boasts. Rope Escape is an enrolled thrill of escaping the jungle with the help move ropes. To say is, it is just addictive. He who installed this game has to stand still with its gameplay. There are very few users who don't show any kind of interest in this game rather than Temple Run or Temple Run 2. Temple Run games are confined to swipe up, down, right and left but while we talk about Rope Escape, it is something different. It offers different environment in which one could use different tactics. In the game, firstly one is supposed to throw the hero of jungle run, in the midst of jungle with the help of a catapult. The idea of catapult seems to be jotted from Angry Birds but Rope Escape developers have shows a great advancement in making that. It is not a simple catapult; it is a giant weapon which was early used in wars in real world. It is a giant catapult which threw rocks and burning things to defeat enemies. But no more, as now a boy dares to chase it. When the game starts, the brave boy is sitting in the catapult and one has to tap the screen to throw the boy in the heart of the jungle. From then, the adventure begins.

To answer this question is very easy. Rope Escape is fun addictive and with an HD graphical interface between the game and its player, it has been quite worth playing. To play, follow the steps given below:

Step 1: Tap the screen anywhere to throw the boy in the air. It means tapping acts as a trigger of the catapult.

Step 2: Swing on the trees, on the balloon crafts, on the space ships, on UFOs (Unidentified Flying Object) and much more.

Step 3: Use power-ups to avoid dying mostly and to score big.

How to score massively?

To boost your score in Rope Escape, below are some top tips and tricks:

Tip 1: When the game begins, just concentrate upon the gameplay. When I started to play this game, I just tapped and tapped the screen because I actually was unknown of how to tackle with the game that time. So, it means the game requires all of your senses clear while playing.

Tip 2: Use ropes when you need. Many players unnecessarily use to throw ropes every time just to pretend to be a Rope man (rather than Spider one). This is not any symbol of good gamer. Actually most players fail to master the Rope Escape game with this kind of tactics. After showering the ropes in air, one fails to swing the character through any tree. So try to use ropes when needed.

Tip 3: Use power-ups and boosts to cross the limits. There are many power-ups that you will find while the gameplay. My most experienced power-up in this game is Rocket pack or we can say Jetpack. You can also buy many power-ups in its store.

Now, let's check out some top tricks to be utilized while the gameplay, very below:

Trick 1: Use Jetpack and reach high and score massive. Yes! You can score big in the game buy just using a Jetpack. Know how by following the steps given below:

1. Get a Jetpack. You can catch it while gameplay or can buy it from the store.

2. When the Jetpack begins to control you, tilt you smart device up.

3. It will allow the boy to cross the limits and reach the space.

4. While you fall down, your score will boost up.

Trick 2: Swing on balloon crafts and let them get unbalanced. This is an interesting but dangerous trick which one can use in order to get more addicted towards the game. Just follow the steps below to do so and also come to know what happens by doing that:

1. While swinging through high trees, you will be in air every time you change to another tree.

2. There mostly, you will be finding ballooned crafts.

3. Tap on any of them and you will get swung through it.

Then you will notice that the craft has got unbalanced and is going to crush in the jungle. So, detach from that then and swing again through trees. Have fun!

Trick 3: Upgrade the levels of your character to service more in the thrill. But it will cost you coins. Collect coins while gameplay and get enriched with plenty of upgrades.

Trick 4: Want to swing through UFOs! You can by just doing as follows:

1. Get a Jetpack and do what I have already mentioned in the Trick 1st, i.e. tilt your device and reach very high.

2. I guess, you might be in space now. You will be seeing a UFO flying diagonally at a very speed.

4. So, you swung a USO and not only this; UFO will make you go farther.

5. Fall freely and get highest scored. 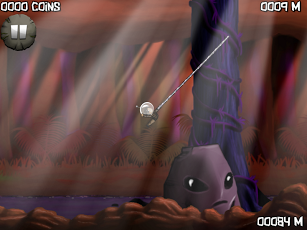 Note that this trick is all due to my experience with the game. The trick recommends you to make your jungle hero, taste death. You might have noticed that when the character strikes the ground, it separates into dozens of pieces (separate head, neck, hands, arms, legs and so). This trick implement with Jetpack. When you get a Jetpack, tilt your device downwards. It will make you character strike on the ground.

What you notice is that the character will crush to very more distance and this will give you more score as because of more distance travelled. Have fun!

So I may think that you have learnt some cool tips and tricks for Rope Escape game, from very above guide. Rope Escape is one of the best games that I have played every on my smart Android tablet. I hope that this article will help you a lot to master the game. And this was all about it! If you find any wrong or incomplete information or want to know more a Rope Escape game, then do let me know in the form of responses.

Do you wish to play some top Adventure games on your Android Smart device then, go this article and get acknowledged about top 5 coolest Adventure games for Android smartphones and tablets.

How to play The Hunger Games Adventures game- review and walkthrough

Review of The Walking Dead Season 1: A Big Sacrifice

Are you in for a new adventure? Will you go lumbering into a sprawling city experiencing it for yourself how is it like to survive in the zombie-Apocalypse? Then read on!

Review of Shovel Knight game: Is it the best adventure game of 2014?