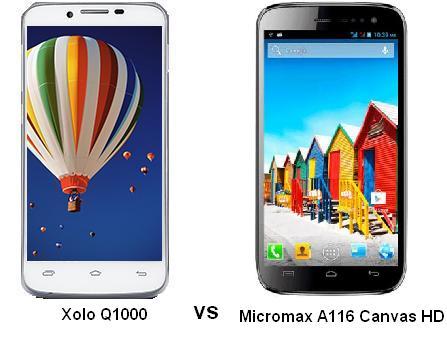 Micromax and Xolo are the two mobile manufacturing companies of India, which not only compete with the international brands, but also with the indigenously manufactured mobile devices. Micromax became a very popular Indian company with its Canvas series of mobile products. Its popularity reached its zenith, when it released Micromax A116 Canvas HD on Valentine's Day in February 2013. Over 9000 handsets of this smartphone were sold in less than 24 hours and the phone went out of stock temporarily in the market. Since, the Micromax could not cope up with the instant demand for the phone. Another Indian manufacturer, Xolo did not want to stay behind in the race. Earlier, Xolo had released two Android smartphones in Q series with success, that are Xolo Q800 and Xolo Q700. Now, the company has released its latest in the Q series Xolo Q1000, with similar features as found in Micromax A116 Canvas HD. This new Android smartphone from Xolo is likely to give a tough competition to Micromax A116 Canvas HD, by making this phone slimmer and lighter than the Micromax smartphone. The other features to defeat Micromax A116 are the latest Android OS, powerful battery, 3G connectivity speed, HD display and HD video recording and playing. Let us give hereunder, the review of features, specs, prices and availability of the two smartphones.

Both smartphones has a screen size of 5.0 inches. The display of Q1000 is HD IPS multi-touch screen, with 16M colours. The screen of this phone is protected by DragonTrail Glass for scratch resistance. On the other hand, Micromax A116 has IPS LCD capacitive multi-touch screen, with 16M colours. There is also a screen protection for this phone. Both smartphones compare well in having the same display resolution of 720 x 1280 pixels and the same pixel density of 294 ppi.

Both Xolo Q1000 and Micromax A116 Canvas HD compete well in their camera features. The primary camera at the rear is of 8 MP resolution in both smartphones, giving image resolution up to 3264 x 2448 pixels. There is only a slight variation in the camera features of two phones. The former has features like autofocus, LED flash, touch focus, BSI sensor, HDR, digital zoom. But, the features of the camera of the latter are autofocus, LED flash, geo-tagging, touch focus and face detection. The front facing secondary camera in Q1000 is of 1.2 MP, while it is of 2 MP resolution in Micromax A116. The video recording, playing capabilities of cameras of Xolo Q1000 are 1080p @30 fps, while it is 720p @30fps in the camera of Micromax A116 Canvas HD.

Xolo Q1000 runs on Google's latest OS, Android 4.2 Jelly Bean, as compared to Android 4.1.2 Jelly Bean of Micromax A116 Canvas HD. However, there is provision of upgrading the OS to Android 4.2 Jelly Bean later. Both smartphones are powered by 1.2 GHz quad-core processors with Media Tek MT6589 chipset. Similarly, GPU of both smartphones is also the same PowerVR SGX544. Q1000 supports sensors like accelerometer, proximity and Ambient light, while Micromax A116 has accelerometer, gyro and proximity sensors.

The important aspect, which the buyers can consider, is the price and availability of the mobile phones, while buying the device. The mobile companies will usually announce the MRP at which the mobile phones will be released for sale in the market. However, the mobile phone sellers charge different prices at different times for a same mobile phone. The prices listed by several online sellers as at the time of writing this article are given for the buyers to compare. The buyers are however advised to check up the prices at the time of buying the phones since the prices and availability keep on fluctuating depending on the discounts offered by the sellers and the supply of the gadgets in the market. I checked up the prices of both the smartphones on June 1, 2013 and they were as follows. Xolo Q1000 was quoted at Rs.13,990 at Saholic, eBay and Maniastore. The smartphone listed at higher prices at Flipkart, Indiatimesshopping, Mirchimart, Snapdeal and Infibeam. Micromax A116 Canvas HD listed at varying prices starting with Rs.13,328 at eBay, Rs.13,685 at Surf2buy, Rs.13,690 at Maniacstore, Rs.13,699 at Zoomin, Rs.13,810 at Mirchimart, Rs.13,849 at Tradus and at Rs.13,999 at online stores like Snapdeal, Saholic, Croma and Themobilestore.

Both Xolo Q1000 and Micromax A116 Canvas HD compare well in their specifications, prices and availability. Now, it is left to the individual choice, which one to select. Although, Micromax A116 Canvas HD has gained instant popularity at the time of its release. But, the buyers must compare the features well now, once its competitors have entered the market, giving the equally good features.