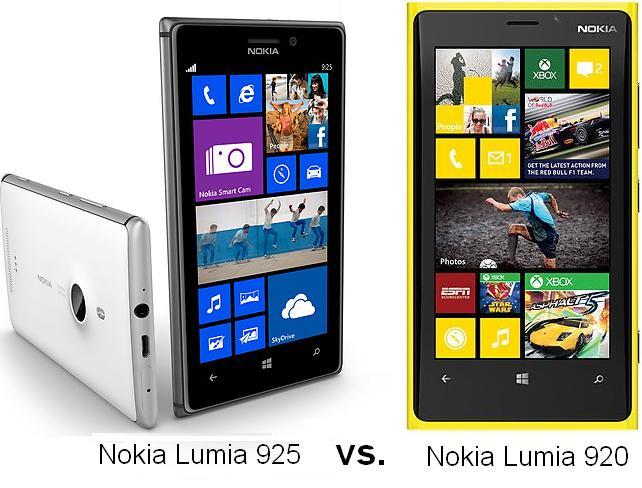 Both Nokia Lumia 925 and Nokia Lumia 920 supports for 2G GSM and 3G HSDPA networks. In addition, Lumia 925 also supports 4G LTE. Both phones provide for single micro-SIM. Lumia 925 has been announced on May 14, 2013, just three months after the announcement of Lumia 920 in February 2013. Lumia 925 will be available for sale in the UK, Europe and China from June 2013 at 470 euros approximately. It will be a flagship of Nokia at T-Mobile in the US. On the other hand, Lumia 920 is already on sale from April 2013. As a matter of fact, the price of Lumia 920 has been considerably brought down after the announcement of Lumia 925.

Nokia Lumia 925 has 0.5 inches larger display size of 4.5 inches than 4.0 inches of Nokia Lumia 920. The display type in the former is AMOLED capacitive multi touchscreen, 16M colors and PureMotion HD+ ClearBlack display. The latter has display type of IPS LCD capacitive multi touchscreen with 16M colors. Lumia 925 has a superior display resolution of 768 x 1280 pixels, against the display resolution of 480 x 800 pixels of Lumia 920. Similarly, the former has a thick pixel density of 332 ppi, as compared to 233 ppi of the latter. Once again, the Lumia 925 has a better screen protection with Corning Gorilla Glass 2, as against the scratch resistant glass protection provided in Lumia 920. This shows that, the Nokia Lumia 925 is the winner in all the departments of display.

Both smartphones have the sound features like Vibration, MP3, WAV ringtones, loudspeakers and 3.5 mm jacks. But, Lumia 925 has an extra sound feature of Dolby Headphone sound enhancement. The internal memory of 925 is 16GB. But, it lacks microSD slot. On the other hand, the internal memory of 920 is 8GB with provision to expand memory up to 64GB via microSD card. 1GB RAM of Lumia 925 is double than the 512MB RAM of Lumia 925. So, in sound and memory features too, Lumia 925 is the winner.

Nokia Lumia 925 equipped with a primary camera of 8.7 MP at the rear. It supports image resolutions up to 3264 x 2448 pixels. It has features like Carl Zeiss optics, optical image stabilization (OIS), autofocus, dual-LED flash, 1/3'' sensor size, PureView technology, geo-tagging and touch focus. On the other hand, the primary camera in Lumia 920 is of 5 MP at the rear, supporting image resolutions up to 2592х1936 pixels. The camera has features like autofocus, 1/4'' sensor size and geo-tagging. Lumia 925 also sports a 1.3 MP front facing camera for video calling at 720p@30fps. However, there is no secondary camera in Lumia 920. The video recording capability of primary camera of Lumia 925 is at 1080p @30fps with video stabilization, where it is 720p @30fps in Lumia 920. Nokia Lumia 925 has a very big advantage over Nokia Lumia 920, in camera and video recording features.

Both smartphones supports for the same browser, HTML5. Lumia 925 is the winner in providing an FM radio, which is lacking in Lumia 920. As far GPS and Java is concerned, both smartphones have same features, providing A-GPS and GLONASS , but without the Java support. Lumia 925 is available in black, white and gray colors, where Lumia 920 is available in yellow, red, cyan, white and black colors.