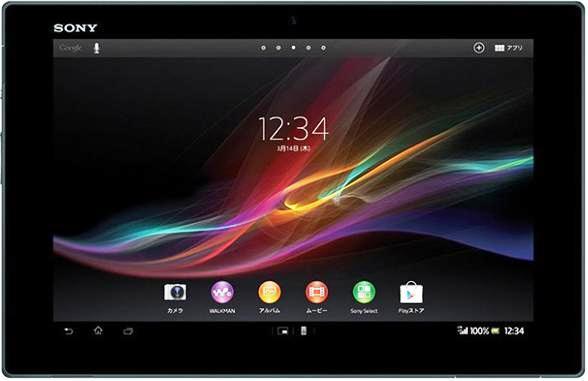 Banking upon the success of Sony Xperia Z smartphone, which was released a few months ago, Sony has now released the Sony Xperia Tablet Z to attract the buyers. Perhaps, you will remember that, Sony had showcased Sony Xperia Tablet Z at the World Mobile Conference (MWC) 2013. The tablet was first announced by Sony in January 2013. It was then clarified by Sony that, the tablet will be first made available in Japan in the spring of 2013. Sony had followed a persistent policy of announcing its Xperia smartphones for the past some time. It had recently announced Xperia Z and Xperia ZL smartphones, which proved be very successful. Riding on the success of its smartphones, Sony has now launched the Sony Xperia Tablet Z in India, during the fourth week of May 2013. The Tablet has already been made available for sale at a pre-order price of Rs.44,990 at two of the reputed online sellers of India. Infibeam.com has listed the Sony Xperia Tablet Z Wi-Fi with 32GB onboard memory at Rs.44,990. The website has indicated that, the product will be available from June 3, 2013. It has also made it clear that, the tablet will be shipped within 2 - 3 business days, from the date of launch by Sony. Similarly, another reputed online seller Flipkart.com has listed Sony Xperia Z 3G with 16GB onboard memory at the same price. Both the websites have offered to the buyers, a free leather bag worth Rs.3000. We shall now discuss the features and specifications of Sony Xperia Tablet Z Wi-Fi, though, there is a 3G variant of the tablet also available.

The Wi-Fi version of Sony Xperia Tablet Z does not support any networks, although the 2G GSM and 3G HSDPA networks support will be available for the 3G variant of the tablet. The dimensions of this tablet are 266 x 172 x 6.9 mm. With a thickness of 6.9 mm, Sony Xperia Tablet Z is one of the slimmest tablets in the world. The weight of 495 grams of the tablet also makes it convenient to carry. The tablet was announced by Sony in January 2013, after showcasing it at Mobile World Conference 2013. It has been released in India in the fourth week of May 2013.

The 10.1 inches display size of the Sony Xperia Tablet Z will be quite comfortable to the eyes of the users. The display type is TFT LCD capacitive, multi-touch screen with 16M colours. The display resolution of 1200 x 1920 and pixel density of 224 ppi will give clarity to the display. The tablet is IP57 certified for resistance to water and dust. The screen is shatter proof and is protected by a scratch-resistant glass. The user interface is controlled by Sony's second generation Sony Mobile BRAVIA Engine 2.

The tablet provided with a loudspeaker and a 3.5 mm jack. The internal memory of the tablet comes with options of 16GB and 32GB. Besides, there is a microSD card slot to expand memory up to 64GB. This table has 2GB RAM support.

The Wi-Fi version of the tablet does not have the support of GSM or HSDPA networks and there is no SIM too. So, the connectivity features of Sony Xperia Tablet Z Wi-Fi include Wi-Fi 802.11 a/b/g/n, dual-band, Wi-Fi hotspot, DLNA, Bluetooth 4.0 with A2DP, Infrared port, NFC and MicroUSB 2.0.

The tablet is equipped with an 8.1 MP primary camera at the rear. This camera supports image resolutions of up to 3264 x 2448 pixels. The camera features include autofocus, geo-tagging, touch focus, face and smile detection and HDR. The video recording capabilities of this camera are 1080p @30 fps. The secondary camera at the front is of 2.2 MP for video calling. It can also record videos at 1080p @30fps.

Sony Xperia Tablet Z Wi-Fi runs on Android 4.1.2 (Jelly Bean) OS. There is a provision to upgrade this OS to Android 4.2 (Jelly Bean), as and when the upgrade is available. The tablet is powered by a 1.5 GHz quad-core Krait processor with a Qualcomm Snapdragon APQ8064 chipset. The supported graphic processor is Adreno 320. This tablet has sensors like accelerometer, gyro and compass.

The messaging facilities in Sony Xperia Tablet Z Wi-Fi are Email, Push Mail, IM and RSS. The supported browser is HTML5. There is an FM radio with RDS. The tablet has A-GPS support and GLONASS. The Java supported via MIDP emulator. The available colours for this tablet are black and white.

Sony Xperia Tablet Z is fitted with a non-removable Li-Po 6000 mAh battery. It gives a talk time of up to 10 hours (multimedia) and stand-by time of up to 890 hours. The music play time is up to 110 hours.

Looking at the success of its predecessor smartphone with the same name, Sony Xperia Tablet Z is sure to make a good progress in its sales. The price of Rs.44,990 appears to be reasonable for the bundle of features provided in this tablet. There is a likelihood of the price coming down as is usually observed that, the price of a smartphone or tablet will be more, when it is released and it comes down within a very short time after the product becomes available at many online shops. For example, the price of Samsung Galaxy S4 was announced at Rs.41,500, when it was released in about 60 countries in the world on April 27, 2013. The same phone is being sold at Rs.37,990 at Kaunsa.com today.