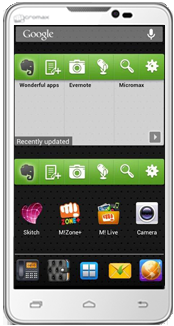 Keeping with the name of this smartphone, you can do smart doodles with the phone. The phone comes pre-loaded with 'Ever Note' app enabling you to be quick to draw anything you want with the stylus.
Let us discuss the features, specifications, review, price and availability of Micromax A111Canvas Doodle, very below.

Micromax A111 Canvas Doodle supports 2G GSM and 3G HSPDA networks. It is a dual-SIM smartphone. The smartphone was announced few days ago and has also been released in the market.

Following the trend of smartphones with large display, Micromax has provided this phone a display size of 5.3 inches. The phone supports capacitive multi type touchscreen with 16M colors. The display resolution of this phone is 480 x 854 pixels and 185 ppi pixel density. These features are mediocre with regard to the clarity of the images on the screen.

Like most of the smartphones, this phone also has vibration and MP3 ringtones, a loudspeaker and a 3.5 mm jack. The smartphone has an internal memory of 4 GB out of which only 1.22 GB is user available. Externally, the phone supports a micro SD card slot. This enables the phone users to expand memory up to 32 GB. The RAM support is of 512 MB.

There is a primary camera of 8 MP at the rear of Micromax A111. This camera can support image resolutions of up to 3264 x 2448 pixels. The camera features include autofocus, dual-LED flash, geo-tagging, touch focus and face detection. The camera also supports multi-zoom, wide screen video and night mode recording. The camera has the capability of recording videos. The phone also has a front facing 2.0 MP camera for video calling.

The messaging facilities in Micromax A111 Canvas HD pro are provided through SMS (threaded view), MMS, Email, Push Email and IM. The supported browser is HTML5. For entertainment, there is an FM radio. The smartphone has GPS support (A-GPS and Glonass). The phone also supports Java via Java MIDP emulator. This smartphone comes only in white color.

Other features and battery

The smartphone equips a Li-Ion 2100 mAh battery with a stand-by time up to 220 hours and a talk-time up to 6 and half hours.

In my opinion, Micromax A111 Doodle Canvas bundled with many good features at a very low cost is worth buying for any middle income group person. The smartphone is likely go get a severe competition to the company's own flagship phone Micromax A116 Canvas HD.

Are you looking for a Micromax Canvas Music A88 manufactured to meet the specific needs of music lovers? Your search ends here, since Micromax has released its Canvas Music A88 smartphone at an affordable price of Rs.8,499/-. The smartphone is not only special for music lovers, but also performs all other functions of a smartphone. Read this article to know features, specifications, review, price and availability in India of Micromax A88 Canvas Music. You can download over 3 lakh songs for free.