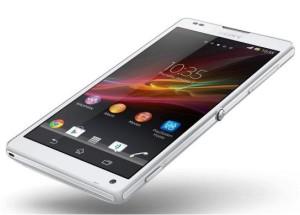 Xperia ZR is the next water resistant and dust proof smartphone from Sony, with which a user can do 5 feet under water video recording for up to 30 minutes. But this feature is not applicable for the water containing salt. It means you can't use this smartphone in sea water. For this mobile, customers are provided an option to select their any favorite color among - pink, mint, black and white. This is a powerful and reliable handset with various user friendly and latest features including a full HD video recording camera, battery stamina mode, one-touch sharing, 4G and many more.


Like earlier released Xperia Z handset, Xperia ZR is also having solid water proof built-up. The device is IP58 and IP55 compliant. A user can carry it in harsh weather conditions or in dust and water areas without any fear. You can also use video camera 1.5 meter underwater and make full HD video recording, up to half an hour.


With a bit smaller screen (4.6 inch) than its predecessor 5-inch Xperia Z and similar contrast enhancing Mobile BRAVIA TVs Engine 2 technologies, it owns HD based OLED display. An OptiContrast panel on device, creates pitch black surface for the turned off screen. By reducing the reflection, this panel gives clear vision in sunlight also. Its sensors are integrated on lens for increasing screen response and to detect scrolling as well as finger moments on display, very quickly and gently. Besides this, the device supports one-touch connection for audio and video sharing.

Like Xperia Z, the upcoming new handset also has a 13MP camera, but packed with more new powerful features like "Exmor RS for mobile" and HDR, which allow video as well as image shooting even in harsh environmental condition or under water. Moreover, a user can also take snaps even without opening its HD camera screen. Its burst on mode allows enormous snap shooting at 15 frames per second.


Besides common connectivity ports, the handset includes a 'One-touch' function. Using this function, you can share large number of music, video and snap files from your handset to other NFC-enabled Sony gadgets. An advanced app-enabled wireless head, 'SBH50 stereo Bluetooth' allows Bluetooth streaming on the device. It includes FM radio and allows one-touch wireless connection for audio streaming. The head set is available in white and black colors.

It's new battery stamina mode boosts up the battery backup of the smartphone, four times then average. When your smartphone is on standby, the tool automatically shuts down all battery draining applications.

Its 'Movies' app allows user accessing around 150,000 movies from Video Unlimited. You can find online or offline content using album, Walkman and movie apps. Not only this, you may also download many of your favorite songs from 20 million songs' choice library from Music Unlimited.

Other tough competitor in market


The upcoming Samsung Galaxy S4 Active, the rugged version of Galaxy S4 with 5 inches display screen and 13 MP rear as well as a 2MP front camera comes on top of toughest competitors of this Sony handset. It is also a dust, water resistant and shockproof device with IP and Bluetooth 4.0 certifications. Like its earlier version Galaxy S4, this smart phone is also gaining very high response from Samsung handset lovers.

Are you looking for a review of Sony Xperia ZR? Here you can read detailed review about new waterproof smartphone from Sony, Xperia ZR, which features 4.5-inch HD Reality Display and powerful Qualcomm Snapdragon S4 Pro Processor. Lets find out its new features, pros and cons.