With the help of Sybo Games studio, Killo Games developed an Android game cum iOS game which not only popularised it but also became its all-time milestone. The game, namely Subway Surfers has crossed over 100M (100,000,000) downloads in last 30 days and no one is accurate in calculating the total downloads of this addictive game. Subway Surfers is an Editors' Choice game available on Google Play Store. With around 4.7 star rating and running on every Android device having v2.3.3 OS and up, it is attracting more than 10,000 download per day. Because of a realistic and 3D interface, nonstop entertainment, zeal and chase, Subway Surfers ha be put under Arcade & Action category. While gameplay, a player feels himself running for his/her escape from the clutches of a grumpy Inspector and his barky dog. Actually Jake, the beginning character, is making a subway surfers tag on one side of a train and an inspector sees him and from there your dash out as fast as you can, dodging a traffic of trains on three tracks. Firstly the trains are stationary but with the passage of time, they start to move in an opposite direction towards you. Get over the trains and jump and jump, get down and avoid striking any. It is an endless game and you are supposed to help out yourself to escape as far as possible. Complete daily challenges, collect coins, buy power boosts and upgrade many ones and much more. Just run, dash, dodge, jump, collect and score big.

Subway Surfers is a much featured game and is only 25 MB in size. The first and foremost thing is that the game is cost free and gets updated every week. So get ready to grind the trains on three parallel tracks with you cool crew (Beginner is Jake and others are to be unlocked). Experience the Colorful and vivid HD graphical interface and find yourself running here and there. You are incoming but can run out of the game if you don't dodge the oncoming trains. Collect jetpacks while gameplay and run in air, collecting dozens of coins with paint powered suit. Jump very high by Super Sneakers and be magnetic sometime, to collect maximum coins from a single run. Help your friends and challenge others with your lightning fast swipe acrobatics and join the ultimate daring chase. Surf the subway both by feet and hoverboards (costs 300 coins). To play, just swipe on the screen, left, right, up and down.

Tips to enhance your score

You may have mastery on Temple Run, Temple Run 2, Temple Run Oz and so, but it master Subway Surfers game is not everybody's cup of tea. I have a pretty good experience with the game and I tell you that I am able to score in lacks today, in every run. Check out the tips to enhance and boost up your score. 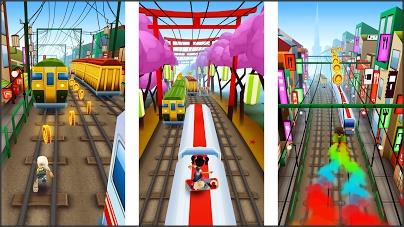 Tip 1: Concentrate and focus 100% while gameplay: I have often have faced game over message because of lack of concentration and focus while playing Subway Surfers. A player must note that these types of games can't be mastered if his/her focus gets disturbed for even a minute span of time. Also, there is a rapid increase in the speed of the character and obstacles come closer as quick as blink of an eye. So try to concentrate and focus 100% of your intention while gameplay to score really huge.

Tip 2: Try to keep mostly on Trains: Stationary trains are of great use. Try to run on the trains to get a better view. I have often noticed that while going through the tracks, more chance arise to hit the obstacles. It is due to narrow vision which the game provides of walking below the trains. So try to keep mostly on trains to broaden your vision and tackle every obstacle.

Tip 3: Use hover boards to avoid game over: This is the best trick, tip and you can also do call it a cheat. To score big, I suggest you to collect plenty of coins, then buy hover boards from store for 300 coins each and prevent accidental crash with the obstacles for 30 seconds. The time limit indicates that hover board is not for ever; it is valuable and precious and can prevent only one strike.