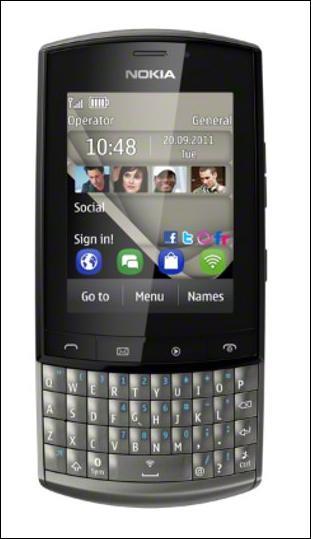 Nokia Asha 303 is a smart QWERTY cum touchscreen phone. It is also popular in being a 3G device and comes with DGE Class 32, Wi-Fi b/g/n and incredible GPRS Class 33 support. Being a Nokia smartphone, 303 have a 3.2MP full focus camera with 4x digital zoom. The camera is also capable of recording high definition videos and much more. Users can remain in touch with their friends, community and buddies through many preloaded apps, including Nokia Messaging, WhatsApp, Push email, and social networking apps. Yet there is no end, the smartphone features Shazam app (latest music tracking app for Nokia smart phones), Flash Lite, VoIP, dazzling 1GHz processor and very more.

The edges of the smartphone prove it's sharp, the light body proves its handiness, the dimensions prove it high end token and the color choice wholly and solely suits its versatility and worth being. Yes! Asha 303 weighs only 99 g and sizes (dimensioning) around 116.5 x 55.7 x 13.9 mm. It is of the Candybar form factor and comes in suitable colors, including silver, red, graphite, green, purple and aqua. Red and Aqua color are the best and recommended choices to be made while buying this smartphone.

I have already mentioned above that Asha 303 is both touch and QWERTY style smartphone. Moreover it has a 2.6 inch Capacitive TFT LCD display with a resolution of 320 x 240 pixels and 262 K color depth (number of colors). Also the keyboard features QWERTY interface, touch navigation and 2 side controls, volume keys and lock key. For voice calling, the smartphone features VoIP which is further featured with Quadband (GSM 850/900/1800/1900) 2G networks and Pentaband (WCDMA 850/900/1700/1900/2100) 3G networks, both giving worldwide coverage.

Nokia Asha 303 has an average memory capacity of 100 MB and covers 128 MB of RAM (random access memory). Moreover, the smartphone has 256 MB ROM (read only memory). The expansion capacity of its memory is up to 32 GB including ample space for multimedia storage. In addition to these, it equips a Li-Ion 1300 mAh battery BP-3L which can be charged via 2mm Nokia charger AC-11 pin. The average battery backup which the smartphone offers is 47 hrs on music playback, 8 hours 10 minutes on 2G talk time, 7 hours 10 minutes on 3G talk time, 30 days on 2G standby and 35 days on 3G talk time modes.

Nokia Asha 303 is available on many online shopping stores including Saholic.com, Snapdeal, MirchiMart and Kaunsa.com and so on. It has been priced around Rs 8,899 in India. The package contents of the smart device include Nokia Asha 303 handset, Li-Ion 1300 mAh battery BP-3L, 3.5mm headset, Nokia charger AC-11, data cable CA-101 and a user guide.

Helo
Good to see a touch-Cum- QWERTY Phone.
If only it could support 4+ of 4G I would be the first to go for it.