Panasonic is one of the most popular brand names in computer market, who have masters in making robust computing devices. Last month, company has unveiled their two most rugged tablet machines, which are water and dust proof and constructed well with very solid built-up.

In my last post on such rugged tablet PCs, Part-1, I mentioned specs and features of two tablets from MobileDemand and Fujitsu. And for this time, I am going to describe two ultimate robust devices from Panasonic, both running Pro version of Microsoft's new operating system.

The first is Toughbook C2 is a 12.5 inches convertible tablet and 3.99 lbs in weight. It also has a spill-resistant keyboard. And the second FZ-G1 tablet is water and dust resistant machine with strong silver plastic shell bounded by rubber corners. 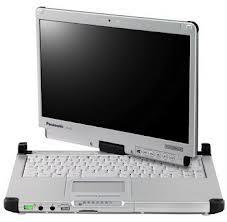 The Toughbook C2 from Panasonic is a highly durable 12.5 inches laptop, which runs Microsoft's latest Pro version of Windows 8. As its named suggests, this is a very tough machine which comes with three years limited warranty. And a keyboard dock, when attached to the tablet, allows it to convert into full fledged laptop.

The computing device boasts of a 12.5 inches 5-point capacitive 500 nit HD display. It also features anti-glare and anti-reflective treatment with IPS panel for giving ultimate wide viewing angles. It has a 720p HD webcam device has a built-in microphone and a 3MP rear camera.

The machine weights around 3.99 lb and has a spill-resistant keyboard with magnesium alloy case. It has triple hinge design for providing extra support to device screen and converts the tablet into a shock proof