Herald of Chaos is a strategy based card game from Gaia Interactive. This game is currently available for you to play on Facebook for free. The gameplay of Herald of Chaos features a combination of both strategy as well as a creative card game. This fantasy game allows its players to even compete with their friends by taking the advantage of the live multiplayer mode, by which they can play one on one battle. The game also offers a large variety of customization for your army by means of several available cards. The game even allows you to customize the deck of the collectible cards. The leaderboard featured within the game gives a boost to your mind to chase for the top place by fighting hard. Apart from these, Herald of Chaos also is much interesting as it features beautiful hand-drawn art along with several other environments and background details.

Herald of Chaos is mainly focused on battle between players as the cataclysm merge with the world which cause it to be collide. There are some fighting for justice, others for power and some others are just seeking destruction. The game delivers a wonderful storyline by which there are three different factions that have been thrust into war. Each faction delivers its own unique storyline. You can choose your side to any of the one factions from: the Noble Kingdom of Avalon, the Hellspawn and the Flameborn. From these factions my favorite is the Flameborn as it features a wonderful battle between feeble humans and powerful demons who own massive collections of dragons. It is up to you to choose the faction that suits your interest. 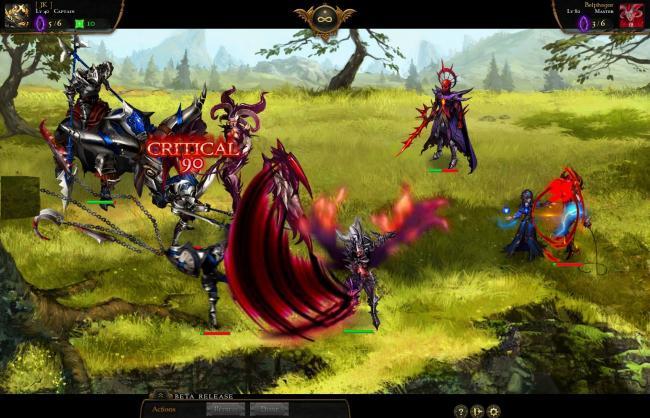 Once you choose the side, then it is time to start the action by building your own army. Finally you will have to attain your goal of achieving victory by leading your forces. But it is not just easy as hunting others down and achieving victory, rather it solely depends on your intelligence when competed against others. Creating perfect deck with several combinations of cards will help you in better running of game. During the large fights, the game will let you control your army within the battlefield. This is done by offering an option to assign a particular unit of your's that will be attacking a specific unit on the other side. The game features a noticeable yellow indicator by the side of your units, this will help you know which enemy units are about to be attacked by them. In order to win each stages you may have to accomplish various objectives like crossing your entire map, capturing mysterious creatures etc. On your way to victory, you may also encounter various opponents who may be weak or even powerful than what you had imagined.

Apart from being just a game, a gridded map interface is being used in Herald of Chaos. This gridded map may sometimes remind you about the famous game 'Heroes of Might & Magic', if you have played it. Also, the best part on Herald of Chaos that may blow everyone's mind is the multiplayer mode. During one on one battle with an opponent, you may feel that your opponent have extremely poor stats compared to you, but as I cleared above, it truly depends on your skill and care that will determine your victory. Overall, Herald of Chaos is one among the best creation from Gaia Interactive that will surely entertain you with the strategic gameplay along with a great card collecting experience.