Pros and cons
Pros: Excellent gameplay that offers a fantastic experience compared to a typical Facebook game. Use of Marvel Comics license within the game was an awesome move which gave the game a lot of your favorite action super heroes.

Cons: Too much dependence of friends for gifted power ups

You may have seen super heroes in the movies, collected toys and comic books of them or may even played as a superhero. It is an awesome moment while playing yourself as a superhero and killing the bad guys out there, isn't it? But did you ever had played by teaming up with other superheros as your friends? This is really something which I missed while playing other super heroes games out there which offer only single player game and only as one or a few more heroes. To take care of my this complaint, Marvel: Avengers Alliance comes in. This has given me my missing opportunity to team up with the real Avengers that includes Spider Man, X-Men, Captain America, Iron Man, Hulk and many other superheros. 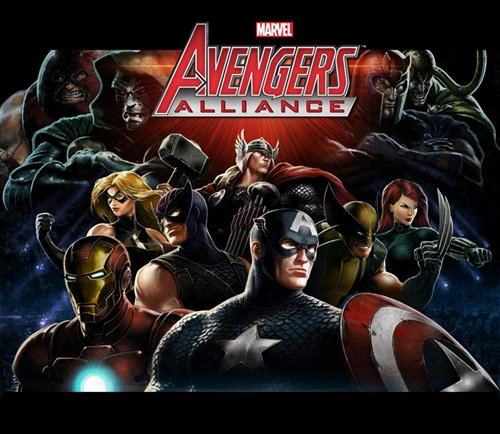 Avengers Alliance is one among the best Role playing game on Facebook which has been published by Playdom. Your main mission is to defeat the most powerful villains like Dr. Doom, Loki etc by teaming up with the superheros as your friends. As the game starts, you will be assigned as a young agent in S.H.I.E.L.D, which is an agency of Marvel Universe being controlled by regular humans. You will then be pushed forward for the training missions to assess you with some basic skills, controls etc. When this short tutorial is over, you will be then put along with some super heroes like Iron Man, Black Widow and Hawkeye as a helper to help them out in various situations. This is the occasion where you had made some real friends out from Avengers, Congratulations!

While peeking into the game further, you will come to know that the gameplay of Avengers Alliance is not a strange one to you if you ever had tried playing any of the 'Final Fantasy' game series. The gameplay mechanics of this game features two important factors that the players must be paying their attention on: Condition Modifiers and Character Types. Condition modifiers are the ability of the player to understand the conditions by which the enemies are being affected with. Whereas the character type here within the game can be explained with a simple example. Have ever known of the game 'Rock, Paper, Scissor'? The same idea acts behind this character type, where some heroes may be strongest against some enemies and the same hero may be weak against another enemy. So it will be important for you to understand your powers and ability to destroy the specific enemy. For example, Iron Man being a flying type is immune to ground base attacks.

Although the impressive part about the game is that it offers you a great combat gameplay, you will feel hard to handle the assault in the starting, but once you acquire the skill, then the game will be more addictive. Another part where Avengers Alliance offers an impressive feature is the ability to unlock various equipments through research. The game also allows you to recruit your own favorite hero to your team from a large collection of Marvel to start the battle. Sending other heroes to complete various missions will bring you out some money and experience too. The equipment that you had unlocked could be useful for your fellow agent from S.H.I.E.L.D or even could be equipped with the superhero itself. But equipping and customizing your S.H.I.E.L.D character would be more interesting as he could be driven out with various weapons, suits or even improve their ability through tweaking. 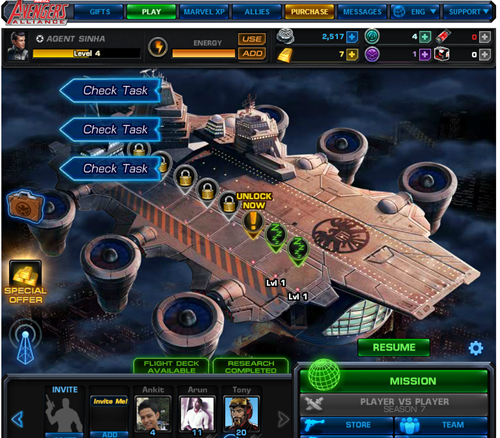 There are times when you encounter various enemies to start a special fight. As you progress through the gameplay, many of the Marvel Superheroes will join you. But in order to make some super heroes to join, you need to unlock them by using the command points. Unlike various other RPG games on Facebook, the Avengers Alliance features an impressive way of actions which are according to the thoughts of the player. This is a must try Facebook game, as it involves a lot of new experience inside it. 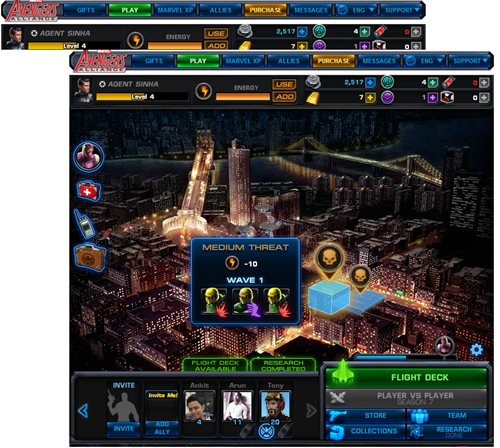 Having your friends in the game will be a lot helpful because command points, silver and many other game currency are best earned by visiting your friends or getting gifts. Other than that the Flight Deck missions require you to have pilots and other staff which can be either filled by having your friends take those positions or for each staff recruitment you will have to spend a gold block.

Don't spend the Gold carelessly. It is the most valuable and the most hard to get currency of the game.

Keep a research active in the background to keep unlocking new things. You will find a lot of important things in research which after being unlocked are very useful during the combat.

When you are don't feel like doing a fight, earn silver by sending your heroes on Flight Deck Missions.

Take every chance to upgrade your heroes and your own weaponry.

Marvel: Avengers Alliance is a great game to enjoy. There are different aspects to the game- easy, medium and boss fights, flight deck missions and Player vs. Player sessions which can help you upgrade your Agent and Heroes quite fast. If it was not for the over dependence on the friends, I would have given full star ratings to this game.